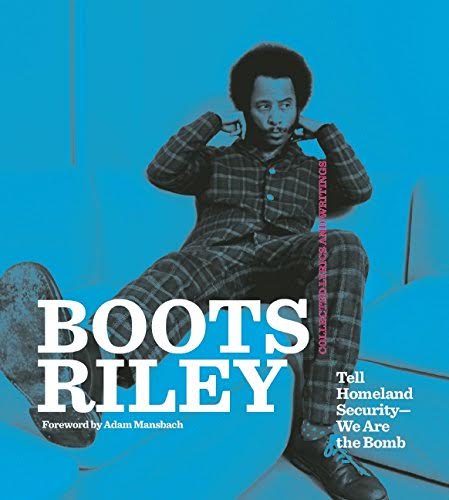 Poet, rapper, and political activist Boots Riley brings together his songs, commentary, and backstories in this rich photo filled account.

About Boots Riley: Tell Homeland Security – We Are the Bomb:

An important, exciting discussion on how art and politics continue to intersect and fuel one another.

Don’t miss this event with Boots Riley–the only known musical artist whose surveillance by intelligence agents has been exposed due to Wikileaks documents.

Boots will share stories from his two decades as a lyricist, performer, and activist: stories about the music industry: about Oakland, and about the role of music – and his own contribution – in the struggle for human liberation.

The event will also celebrate the launch of Boots Riley: Tell Homeland Security–We Are The Bomb (Collected Lyrics and Writings).

Provocative and prolific, Boots Riley has written lyrics as the front man of underground favorites The Coup and Street Sweeper Social Club, and as a solo artist, for more than two decades. An activist, educator, and emcee, Riley’s singular lyrical stylings combine hip-hop poetics, radical politics, and wry humor with Bay Area swag. Boots Riley: Tell Homeland Security–We Are The Bomb brings together his songs, commentary, and backstories with compelling color photos and documents throughout. The book includes a Foreword by Adam Mansbach, New York Times-bestselling author of Go The Fuck To Sleep.

Brian Jones is an actor, educator and activist whose commentary and writing have been featured in a wide range of forums, including MSNBC, the New York Times Room for Debate Blog, Democracy Now! and the International Socialist Review. Jones was the Green Party’s 2014 candidate for Lieutenant Governor of New York, co-narrated the film The Inconvenient Truth Behind Waiting for Superman, and has contributed to several books.