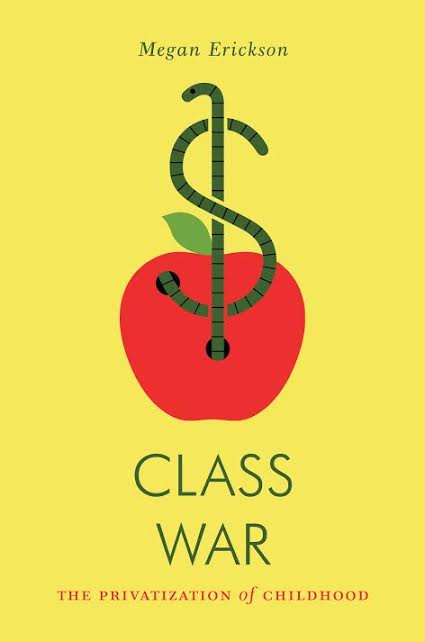 Or just feel free to show up and don’t forget to bring your friends for a great event!

Drawing from Erickson’s own experience as a teacher in the New York City school system, Class War shows how education has been transformed into a competitive “hunger games” for the resources and social connections required for economic success. This event is co-sponsored by Verso and Jacobin.

What is at stake when some American children go to school hungry and others go to school in $1,000 Bugaboo strollers? Class War argues that under free-market capitalism, life paths prescribed by class but framed as parental choices—public or private, gifted & talented, general or special education—segregate American children from birth through adolescence, and into adulthood, as never before.

In an age of austerity, an elite class of corporate education reformers has found new ways to transfer the costs of raising children to families. Although public schools are tasked with providing childcare, job training, meals and social services for low-income children, their funding is being drastically cut; meanwhile, private schools promise to nurture well-rounded individuals for families able to afford the $40,000 a year tuition. Drawing from Erickson’s own experience as a teacher in the New York City school system, Class War shows how education has been transformed into a competitive “hunger games” for the resources and social connections required for economic success.

Megan Erickson is an Editor at Jacobin magazine and Assistant Director of early childhood and youth programs at a youth services organization. She was formerly an editor and blogger at The Big Think, and has taught at both public and private schools in New York City.

Brian Jones is a socialist and an educator. He taught elementary grades for nine years in New York City’s public schools, co-narrated the film, The Inconvenient Truth Behind Waiting for Superman, and has contributed to several books, including What’s Race Got To Do With It? How Current School Reform Policy Maintains Racial and Economic Inequality. His commentary and writing have been featured in a wide range of forums, including MSNBC, the New York Times Room for Debate Blog, Jacobin and SocialistWorker.org. Brian was the Green Party’s 2014 candidate for Lieutenant Governor of New York

The Jacobin Series, published in conjunction with the acclaimed magazine, features short interrogations of politics, economics, and culture from a socialist perspective, as an avenue to radical political practice. The books offer critical analysis and engagement with the history and ideas of the Left in an accessible format.