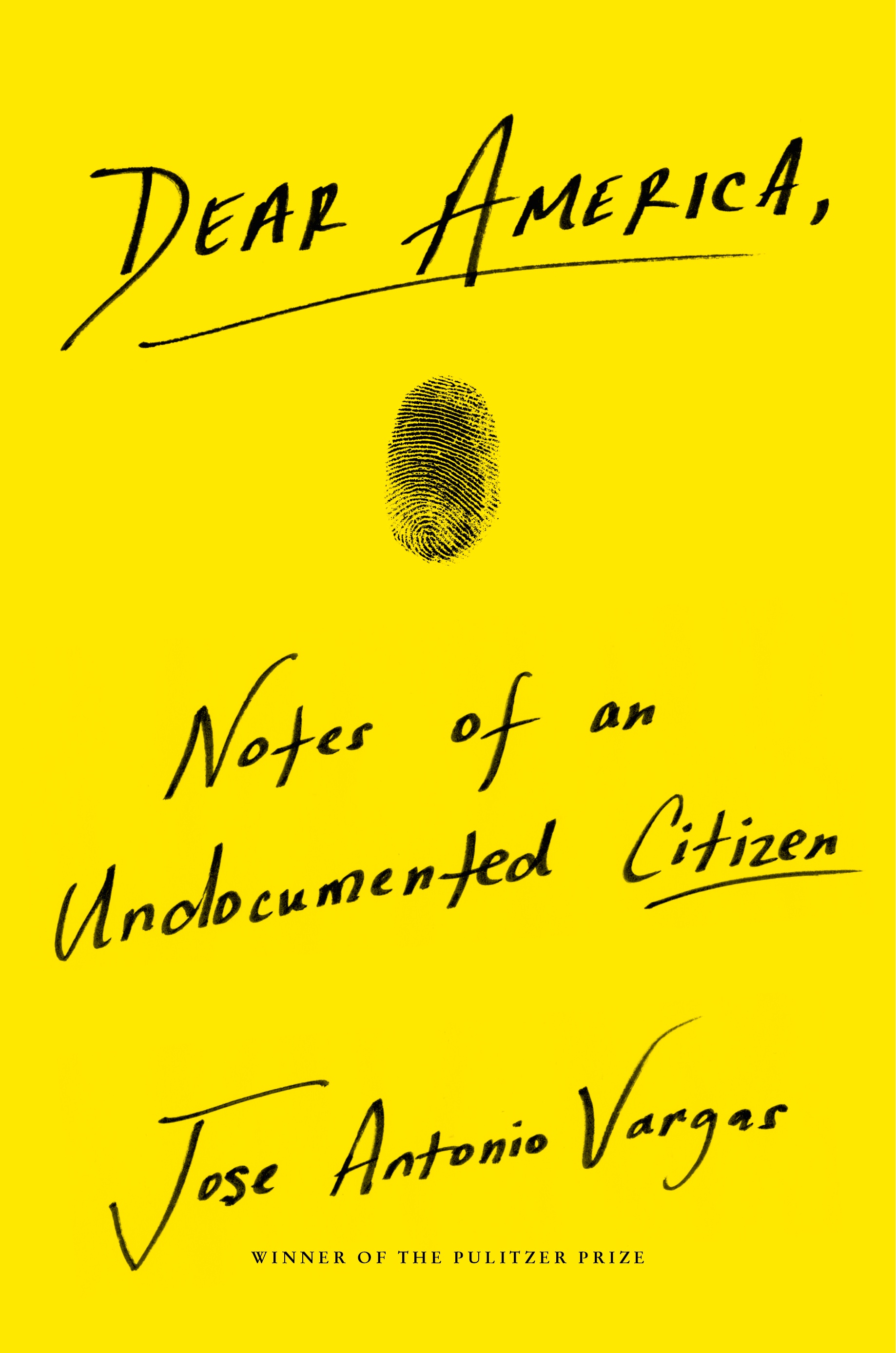 Tickets available at the door tonight.

“Jose Antonio Vargas’s eloquent and emotional book bears witness to a basic truth: we should not be defined by our legal status, but by who we are . . . His voice is an important voice that needs to be heard by all Americans, whether they are Americans by birth or by choice.”
—Sheryl Sandberg, #1 New York Times bestselling author of Lean In

About the Book.
In 2011, Jose Antonio Vargas became America’s best-known undocumented immigrant when The New York Times Magazine published his story about his life in the United States after arriving from the Philippines in 1993 at the age of twelve. By coming out publicly as undocumented, he was risking everything he had built in the United States. Now, with the national debate over immigration at a fever pitch, Vargas examines not only the facts of immigration but also the searing emotional reality of living for twenty-five years as a contributing member of a country that does not consider him one of its own, in DEAR AMERICA: Notes of an Undocumented Citizen (Dey Street Books; On Sale September 18, 2018).

From the Philippines to the Pulitzer Prize.
With the same talent for vivid writing that fueled his meteoric rise in journalism, Vargas chronicles his life from the time he was suddenly woken up one day by his mother in the Philippines and put on a plane to California to live with his grandparents. They were legal, but he wasn’t—a fact he did not know until he tried to apply for a driver’s license at the age of sixteen. A kindly woman at the DMV, who could have reported him immediately, whispered to him that his green card was fake, and told him not to come back.

Over the next few years, Vargas became an outstanding student in Mountain View, the Silicon Valley suburb best known as the headquarters of Google and other high-tech companies. But he lived on the working- class side of town, scrambling to decode the mysteries of American culture, particularly around race and immigration. He deeply impressed his high school principal and superintendent, who became his surrogate parents. He threw himself into journalism as a reporter on his high school newspaper, because seeing his name in print made him feel real and present in America in a way that nothing else did. After graduation, he gratefully accepted the offer of a venture capitalist to fund his college education at San Francisco State, because as an undocumented person he had no access to the loans and grants available to citizens.

At nineteen, Vargas knowingly lied about his legal status for the first time. To get a job at the San Francisco Chronicle, he checked a box on an application form that said he was an American citizen. Although stricken by guilt, he felt he had no choice if he wanted to stay in the country that had become his home and pursue the career he was born to follow. “I am going to earn this box,” he told himself. A female friend offered to marry him so that he could legalize his status, but he declined because he is gay.

The more ambition Vargas had as a reporter, the more laws he had to break. For a highly coveted internship at The Washington Post, he had to have a driver’s license, and therefore had to lie to get one. He was successful from the beginning at the highly competitive Post, but he felt immense extra pressure because of his undisclosed legal status. He turned down a rare offer to become a foreign correspondent because he had no passport, opting instead to become a political reporter. After a few months, Vargas disclosed his status to a trusted mentor at the paper, which provided him with some temporary relief.

In 2008, Vargas won a Pulitzer as part of the Post team that reported on the massacre at Virginia Tech. But what should have been an occasion for great celebration instead because a burden that made him break down in tears, because it increased the likelihood that he would be exposed. Vargas took comfort in the knowledge that although he had lied about his legal status to stay and work in the U.S., he had never lied in his journalism, meticulously checking every fact and source.

Coming out as undocumented.
As he approached his thirtieth birthday, severely depressed despite all his professional success, Vargas felt that he could no longer live with the lying, the hiding, and the emotional isolation that gnawed at his relationships and his self-image. His young career had reached a height that most veteran journalists can only dream of. By this time, he had been recruited to the Huffington Post by Arianna Huffington and had just finished working on an exclusive profile of Mark Zuckerberg for The New Yorker.

When he revealed his undocumented status in a New York Times Magazine essay in June 2011, Vargas’s life once again changed forever. Immigration lawyers had warned him that if he admitted to telling lies in print, he would become unemployable, and that finding any kind of solution to his immigration problem would be next to impossible. But inspired particularly by black writers like Toni Morrison and James Baldwin, as well as gay heroes Ellen DeGeneres and Matthew Shepard, he felt it was time to risk his privilege not only on his own behalf, but also on behalf of the approximately eleven million undocumented immigrants in the United States. In that same spirit, he wrote a cover story for Time magazine in 2012 that humanized the struggle of being undocumented, particularly for immigrants who were brought to the U.S. as children. On the day the cover story was published, President Obama announced the DACA (Deferred Action for Childhood Arrivals) program.

After coming out as undocumented, Vargas also founded the nonprofit organization Define American, which uses storytelling to change the culture around the way immigrants are perceived, and traveled to scores of cities and towns in forty-eight states, engaging all kinds of people. In the process, he discovered that most Americans (including most journalists) have no idea how the immigration system works, what the citizenship process requires, and how difficult, if not impossible, it is for undocumented people to “get legal.”

The facts about immigration.
The media is not asking the right questions about immigration, Vargas says, leaving the public woefully uninformed. “Even the country’s most credible news organizations,” he writes, “fail to report basic facts about how much undocumented workers pay into a government that vilifies and criminalizes us. Whether by ignorance or indifference, or both, failure to report these facts and provide context has perpetuated the myth of the ‘illegal’ who is taxing society.” [p. 115] The actual facts, compiled on DefineAmerican.com/facts, include:

“The most anti-immigrant period in modern American history”
“We are living through the most anti-immigrant period in modern American history,” Vargas writes, with immigration of any kind, legal or illegal, under unprecedented attack. The government agency that grants citizenship has stopped referring to the United States as “a nation of immigrants,” and President Trump is slashing the number of refugees that can come to the U.S. by more than half. Trump conflates undocumented immigrants with MS-13 gang members, referring to them as “animals” and “snakes,” often in front of boisterous crowds roaring their approval. The everyday lives of Dreamers, young undocumented immigrants who were brought to the country as children, are subject to the president’s tweets. Every day, at least 34,000 immigrants are locked up, at enormous cost to American taxpayers. [pp. 5-6]

In 2014, Vargas flew to McAllen, Texas, to witness and document the immigration crisis on America’s southern border—a crisis, he says, that is mostly the creation of U.S. government policies. While there, he was detained when he tried to leave the 100-mile-wide zone north of the border where everyone (including U.S. citizens) is subject to questioning by federal authorities about their legal status at any time. As a result, he now holds the only legal American papers he has ever received, which make him subject to deportation at any time, although he has no idea when or if this might occur. And even if he wanted to return to the Philippines, he would be in imminent danger there because of the violent campaign against journalists being waged by President Rodrigo Duterte.

Dear America is as much about the excruciating state of existence of undocumented immigrants as it is about the politics of immigration. It is about being forced to lie to survive; about not having a home; about passing as an American in the face of condescension and discrimination; and about families, keeping them together, and having to make new ones who will take their own risks to help you survive and thrive in this country. It is about hiding from the government, and in the process, hiding from yourself.

“Dear America,” Vargas writes, “is this what you really want? Do you even know what is happening in your name?” [p. 197] Lending a human face, a reasoned voice, and a unique perspective to an issue that is bitterly dividing the nation, Dear America is as impassioned as it is timely and necessary.

About the Author.
Jose Antonio Vargas is a Pulitzer Prize-winning journalist, an Emmy- nominated filmmaker, and a leading voice for the human rights of immigrants. He is the founder and CEO of Define American, the nation’s leading non-profit media and culture organization that fights injustice and anti-immigrant hate through the power of storytelling. He has worked as a reporter at The Washington Post, The Huffington Post, the San Francisco Chronicle, and other leading publications. He has written stories for The New York Times Magazine and Time, and his work has appeared in Rolling Stone and The New Yorker. In addition, he has produced and directed Documented, an autobiographical feature documentary that aired on CNN, and White People, an hourlong MTV special on what it means to be a young and white in a changing America. His many media appearances on every type of platform range across the political and cultural spectrum from “Real Time with Bill Maher” to “Tucker Carlson Tonight.” Currently subject to deportation at any time, he has no permanent residence. About the Moderator.
Joy-Ann Reid is the host of MSNBC’s “AM Joy,” a columnist for the Daily Beast, and the author of Fracture: Barack Obama, the Clintons, and the Racial Divide. She is the former managing editor of TheGrio.com, and has written columns for the New York Times, the Miami Herald, the Sun-Sentinel, Salon.com, and the South Florida Times. She lives in New York City.