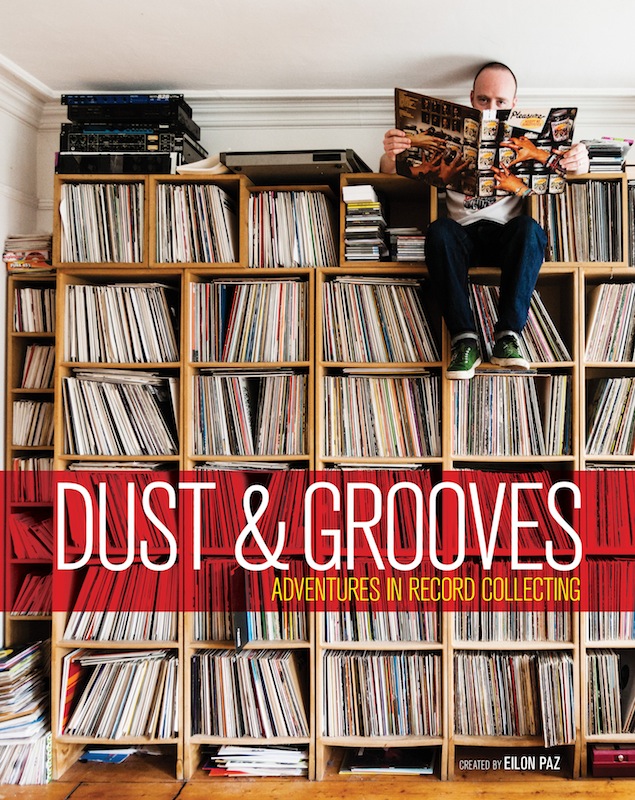 Dust & Grooves joins forces with I Love Vinyl, Dub-Stuy Records (& the Tower of Sound), Turntable Lab, and Classic Album Sundays for an opening reception and book launch party for Dust & Grooves: Adventures in Record Collecting, the debut book by photographer Eilon Paz about the world’s finest record collectors.This public event celebrates vinyl culture and photography with a photo exhibition, a listening session, a book signing, and a raffle, featuring rotating sets from over 20 DJs who are featured in the book spinning all-vinyl on an audiophile sound system.

The official Record Store Day book for 2014, Dust & Grooves is a 416-page coffee-table book that profiles over 130 vinyl collectors and their collections in the most intimate of environments—their record rooms. With a foreword by the RZA, compelling photographic essays are paired with in-depth interviews to illustrate what motivates record collectors to keep digging for more records. Readers get an up close and personal look at a variety of well-known vinyl champions as well as a glimpse into the collections of known and unknown DJs, producers, record dealers, and everyday enthusiasts.

This gathering of music lovers and photography enthusiasts will be hosted at Powerhouse Arena in DUMBO, the heart of the art district of Brooklyn. With soaring 24-foot ceilings on the 5,000 square foot ground floor (with glass frontage and amphitheater-style seating), the Powerhouse Arena is an event space, bookstore, and photo gallery known for showcasing controlled mayhem fusing the worlds of art, photography, design, and music.

6:00pm The party kicks off with rotating sets from over 20 DJs who are featured in the book, spinning all-vinyl, and will continue through till the end of the event. A photo exhibition of 40 select photographs from the book will be displayed at the gallery.

About the Media Partners:

I Love Vinyl presents the premier all-vinyl dance parties in NYC, founded in 2009 by six resident DJs with 100K records and 100 years of DJ history between them. It holds monthly parties at both Le Poisson Rouge in Manhattan’s Greenwich Village and TBA Brooklyn in WIlliamsburg. Former Brooklyn homes include Brooklyn Bowl, Cameo, and Public Assembly Loft.

Dub-Stuy Records is a Brooklyn-based record label and production company dedicated to advancing sound system culture and music in New York and beyond. Leveraging their strong network of partners, their services range from event production, curation, content development, and product design. The Tower of Sound was the original impetus for the founding of the label. Rooted in the tradition of Jamaican sound system, it is a state of the art five-way system designed to produce clear and concise frequencies from crisp highs to massive lows.

Classic Album Sundays hosts sessions during which participant sit down and actively listen—on an audiophile sound system—to a selected classic vinyl album all the way through, giving it the full attention it deserves. Founded by Colleen ‘Cosmo’ Murphy, CAS now hosts regular sessions in key global cities as well as during curated events with artists/producers, festivals, galleries, and more. The sessions often feature guest presenters and an extensive historical introduction, offering a rare, meditative, and therapeutic experience, not to mention artistically beneficial.

Turntable Lab built its business on fair pricing, informed reviews, and a well researched selection of “Lab approved” items. Established by Anthony Cattarina, Jasper Goggins, and Peter Hahn, the idea for the Lab was based on negative experiences at stores that sold disappointing dj equipment;; TTL applied their business model to include recorded music, production equipment, clothing, and books, and today TTL is a recognized tastemaker in all those areas. “The Lab” opened its first retail store in 2001 and then another store in Hollywood, California, in 2005. Their current headquarters are located in Brooklyn.