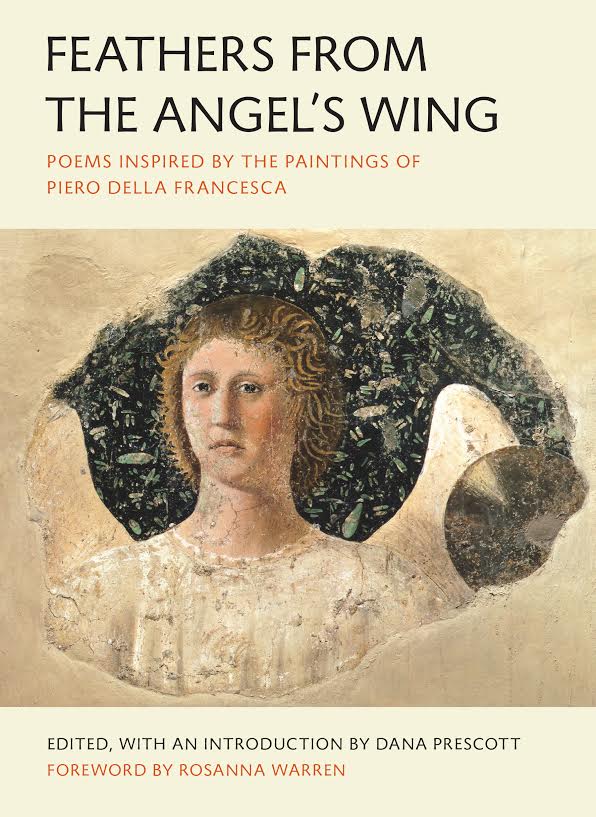 In this anthology, esteemed poets from America, Italy, and elsewhere follow the Piero Trail, a route through Tuscany and Umbria that features frescoes by the legendary Renaissance painter, Piero della Francesca.  Select poets will read their contributions, and editor Dana Prescott will speak about the project.

About Feathers from the Angel’s Wing:

In this exquisite anthology, esteemed poets from America, Italy, and elsewhere follow the renowned Piero Trail, a route through Tuscany and Umbria that features some of the most acclaimed frescoes by the legendary Renaissance painter, Piero della Francesca. The resulting poems—including ones by Henri Cole, Jorie Graham, Charles Wright, and Patti Smtih—capture Piero’s incomparable influence in the artistic, literary, and spiritual worlds, generated as they are by the transcendence of Piero’s timeless powers. Including twelve reproductions of Piero’s frescoes, a foreword by Rosanna Warren, and an introduction by anthologist Dana Prescott, Feathers from the Angel’s Wing is unforgettable collection, a book to be cherished by lovers of art, artists, and the spirits that move them.

Dana Prescott, painter, is the executive director of the Civitella Ranieri Foundation, a renowned artist colony housed in sixteenth century castle in Umbria, Italy. Previously, she was Heiskell Arts Director at the American Academy in Rome. Her writing has appeared in The Christian Science Monitor, Seattle Times, Washington Times, and elsewhere.
Judith Baumel is a professor and director of the MFA program in creative writing atAdelphi University. The author of three books of poetry, she is a poet, critic, and translator living in the Bronx, New York
Dave King is the author of the novel The Ha-Ha, which won the 2006 Rome Prize
Karl Kirchwey is a Fellow of the American Academy in Rome, where he also served as Andrew Heiskell Arts Director.In addition to his poetry, his work includes book reviews, translations, literary curatorship, and advocacy for writers and writing.
Honor Moore is the author of three poetry collections and two works of nonfiction, including The Bishop’s Daughter: A Memoir, a Los Angeles Times Favorite Nonfiction Book of 2008, a New York Times Book Review Editor’s Choice, and a National Book Critics Circle Award finalist.
Rosanna Warren, acclaimed poet and critic, is a former Chancellor of the Academy of American Poets and New York Times Resident in Literature at the American Academy in Rome. Currently, she is the Hanna Holborn Gray Distinguished Service Professor of the John U. Nef Committee on Social Thought at the University of Chicago.
Mark Wunderlich, the author of three poetry collections, has received the Lambda Literary Award for Gay Men’s poetry and the Rilke Prize. He is Professor of Literature at Bennington College in Vermont.
Monica Youn is an American poet, trained as an attorney, who was raised in Houston, Texas. She is the author of three collections of Poetry, Barter, Ignatz, which was a finalist for the National Book Award, and Blackacre.