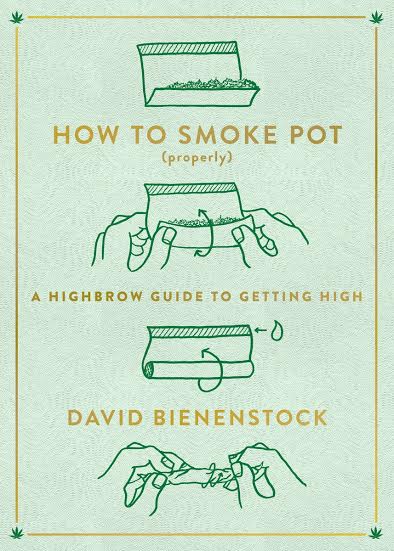 About How to Smoke Pot (Properly):

Once demonized as “the Devil’s lettuce” and linked to all manner of deviant behavior, cannabis sativa has lately been enjoying a long-overdue renaissance. So now, with the squares at long last ready to rethink pot’s place in polite society, and eleven US states considering legalization in 2016, VICE columnist and former High Times editor David Bienenstock charts the course for this bold, new, post-prohibition world in How to Smoke Pot (Properly) — a highbrow guide to getting high.

With plenty of stops along the way for “pro tips” from his friends in high places, including cannabis celebrities and thought leaders of the marijuana movement, Bienenstock covers everything from the basics of blazing, to how Mary Jane makes humans more creative and collaborative, nurtures empathy, catalyzes epiphanies, enhances life’s pleasures, promotes meaningful social bonds, facilitates cross-cultural understanding, and offers a far safer alternative to both alcohol and many pharmaceutical drugs. Plus, informative answers to burning questions ranging from “How can I land a legal pot job?” to “Should I eat a weed cookie before boarding the plane?”

The many hot topics explored in How to Smoke Pot (Properly) include:

Written by a true insider with nearly fifteen years of experience as a dedicated marijuana reporter and a leading figure in cannabis culture, How to Smoke Pot (Properly) is irreverent and intelligent with a focus on pot’s new post-prohibition paradigm. A perfect read or gift whether you’ve “been smoking tea longer than Willie Nelson or just took your first puff last week.”

David Bienenstock is the author of the bestselling Official High Times Cannabis Cookbook, and is the former West Coast editor of High Times magazine. He’s recently grown a following as a frequent contributor and video host/producer for VICE Media, where he writes the Weed Eater column and produces the video series “Bong Appetit.” The master of all things cannabis, he has appeared as an expert on NPR, Fox News, MSNBC, CNN, and HBO, and has been quoted in Salon, GQ, Fast Company, Adweek, Playboy and The Nation.

Krishna Andavolu is a correspondent and producer at VICE Media, as well as the host of the investigative marijuana series Weediquette, which will air on the new Viceland cable network starting in Spring 2016. He once smoked a joint while interviewing the president of Uruguay.

Abdullah Saeed is a video host/producer at VICE, where he’s the star of Bong Appetit, which explores the intersection of cannabis and cuisine, and writes a regular weed column.