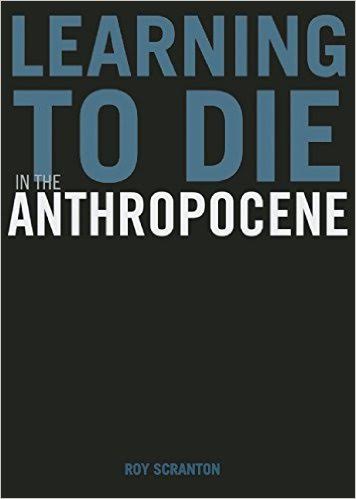 When US Army private Roy Scranton returned home from Iraq, he was confronted with calamities that heralded a threat far more dangerous than ISIS or Al Qaeda: the shock of global warming.  In this response to climate change, Scranton combines memoir, reportage, philosophy, and Zen wisdom to explore what it means to be human in a rapidly evolving world.

About Learning to Die:

“In Learning to Die in the Anthropocene, Roy Scranton draws on his experiences in Iraq to confront the grim realities of climate change. The result is a fierce and provocative book.”

“Roy Scranton lucidly articulates the depth of the climate crisis with an honesty that is all too rare, then calls for a reimagined humanism that will help us meet our stormy future with as much decency as we can muster. While I don’t share his conclusions about the potential for social movements to drive ambitious mitigation, this is a wise and important challenge from an elegant writer and original thinker. A critical intervention.”

—Naomi Klein, author of This Changes Everything: Capitalism vs. the Climate

Coming home from the war in Iraq, US Army private Roy Scranton thought he’d left the world of strife behind. Then he watched as new calamities struck America, heralding a threat far more dangerous than ISIS or Al Qaeda: Hurricane Katrina, Superstorm Sandy, megadrought—the shock and awe of global warming.

Our world is changing. Rising seas, spiking temperatures, and extreme weather imperil global infrastructure, crops, and water supplies. Conflict, famine, plagues, and riots menace from every quarter. From war-stricken Baghdad to the melting Arctic, human-caused climate change poses a danger not only to political and economic stability, but to civilization itself . . . and to what it means to be human. Our greatest enemy, it turns out, is ourselves. The warmer, wetter, more chaotic world we now live in—the Anthropocene—demands a radical new vision of human life.

Expanding on his influential New York Times essay (the #1 most-emailed article the day it appeared, and selected for Best American Science and Nature Writing 2014), Scranton responds to the existential problem of global warming by arguing that in order to survive, we must come to terms with death.

Plato argued that to philosophize is to learn to die. If that’s true, says Scranton, then we have entered humanity’s most philosophical age—for this is precisely the problem of the Anthropocene. The trouble now is that we must learn to die not as individuals, but as a civilization.

War veteran, journalist, author, and Princeton PhD candidate Roy Scranton has written for the New York Times, Wall Street Journal, Rolling Stone, Boston Review, and Theory and Event, and has been interviewed on NPR’s Fresh Air, among other media.

Roy Scranton is an author, journalist, Iraq war veteran, and Princeton Ph.D candidate.  Roy’s journalism, essays, and reviews have appeared in the New York Times, Rolling Stone, Boston Review, Contemporary Literature, and elsewhere.  He has been interviewed by many media outlets, including NPR’s Fresh Air with Terry Gross.

Simon Critchley is an English philosopher currently teaching at The New School, who writes primarily on the history of philosophy, political theory, religion, ethics, and aesthetics, especially literature and theatre.