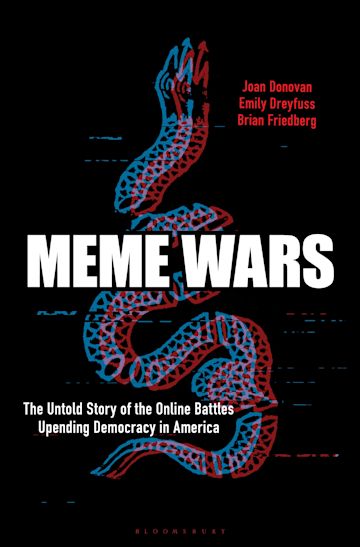 A groundbreaking investigation into the digital underworld, where far-right operatives wage wars against mainstream America, from a masterful trio of experts in media and tech.

Memes have long been dismissed as inside jokes with no political importance. Nothing could be further from the truth. Memes are bedrock to the strategy of conspiracists such as Alex Jones, provocateurs like Milo Yiannopoulos, white nationalists like Nick Fuentes, and tacticians like Roger Stone. While the media and most politicians struggle to harness the organizing power of the internet, the “redpill right” weaponizes memes, pushing conspiracy theories and disinformation into the mainstream to drag people down the rabbit hole. These meme wars stir strong emotions, deepen partisanship, and get people off their keyboards and into the streets–and the steps of the US Capitol.

Meme Wars is the first major account of how “Stop the Steal” went from online to real life, from the wires to the weeds. Leading media expert Joan Donovan, PhD, veteran tech journalist Emily Dreyfuss, and cultural ethnographer Brian Friedberg pull back the curtain on the digital war rooms in which a vast collection of antiesablishmentarians bond over hatred of liberal government and media. Together as a motley reactionary army, they use memes and social media to seek out new recruits, spread ideologies, and remake America according to their desires.

A political thriller with the substance of a rigorous history, Meme Wars is the astonishing story of how extremists are yanking our culture and politics to the right. And it’s a warning that if we fail to recognize these powerful undercurrents, the great meme war for the soul of America will soon be won.

Joan Donovan, PhD, is the research director of Harvard Kennedy School’s Shorenstein Center and one of the foremost experts on media and disinformation in the world.

Emily Dreyfuss is a journalist who covers the intersection of society and technology; her writing has appeared in WIRED, The Atlantic, and The New York Times, among other publications.

Brian Friedberg is an ethnographer at Harvard Kennedy School, who researches far-right and political communities online and published definitive Qanon explainers in WIRED and The Hill. Together, the authors work on Harvard Kennedy School’s Technology and Social Change Research Project out of Cambridge, Massachusetts.