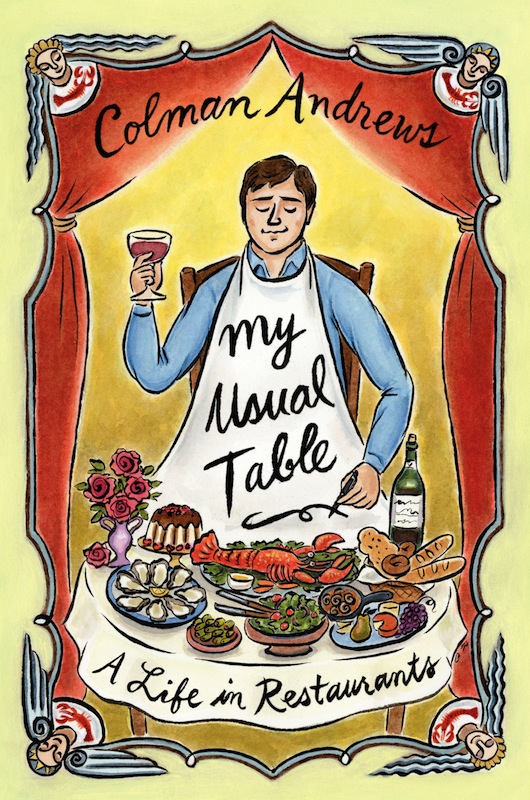 A Saveur co-founder and James Beard award-winner, Colman Andrews pens this love letter to the restaurants, chefs, and restaurateurs. A night for thinking about how we eat, talk, and think about food. Food writer Ruth Reichl joins Andrews in conversation.

About My Usual Table:

From his Hollywood childhood through his days in the music business, his first forays into restaurant reviewing, and his ever-evolving career as a food writer and magazine editor — not to mention the course of his obsessive traveling and complicated personal life — Colman Andrews has seen the world mostly from the dining room. In MY USUAL TABLE, he interweaves his own story with intimate tales of the seminal restaurants and the great chefs and restaurateurs of our time who are emblematic of the revolutions large and small that have forever transformed the way we eat, cook, and feel about food.

In sixteen chapters, each anchored by the story of his love affair with a cherished restaurant, Andrews evokes the unforgettable meals he has eaten over a lifetime, and the remarkable people with whom he has shared them, tracing the evolution not just of our restaurants but our whole food culture. Beginning with a post-war childhood spent at Chasen’s, the glamorous Old Hollywood hangout where studio heads and celebrities rubbed shoulders, Andrews charts a course through the 60’s, when both he and Americans at large fell for the novel “ethnic” food at spots like neo-Polynesian Trader Vic’s or Mexican institution El Coyote. As Andrews began traveling for his writing and magazine career in the 70’s and 80’s, he spent countless hours in the family run cafés of Paris and trattorias of Rome. The timeless dishes so common on their menus, focused on local and seasonal ingredients, would not only come to profoundly influence Andrews’ palate, but also transform the American foodscape forever.

From Andrews’s usual table, he has watched the growth of nouvelle cuisine and fusion cuisine; the explosion of the organic and locavore movements; the rise of nose-to-tail eating; and so-called “molecular gastronomy.” The bistros, brasseries, and cafes he has loved have not only influenced culinary trends at home and abroad, but represent the changing history and culture of food in America and Western Europe. And all along, Andrews has been there right there in the dining room, menu in one hand and notebook in the other. Colman Andrews co-founded Saveur and was its editor-in-chief from 2002 to 2006. After leaving the magazine, he became the restaurant columnist for Gourmet and is currently the editorial director of The Daily Meal, a food and wine mega-site. A native of Los Angeles, he holds degrees in history and philosophy from UCLA, and was a restaurant reviewer and restaurant news columnist for the Los Angeles Times. The recipient of eight James Beard awards, Andrews is the co-author and co-editor of three Saveur cookbooks and seven of his own books on food: Everything on the Table, Flavors of the Riviera, Catalan Cuisine, The Country Cooking of Ireland, The Country Cooking of Italy, Ferran: The Inside Story of  El Bulli and the Man Who Reinvented Food, a biography of Catalan superchef Ferran Adrià, and The Taste of America, a celebration of definitive American foods. RUTH REICHL was born and raised in Greenwich Village. She wrote her first cookbook at 21, and went on to be the restaurant critic of both the Los Angeles Times and the New York Times. She was Editor-in-Chief of Gourmet Magazine for ten years. She now lives with her husband in upstate New York. She is the author of several books including the highly acclaimed, national bestselling memoir Tender at the Bone. Her first novel, Delicious!, will be published in May.