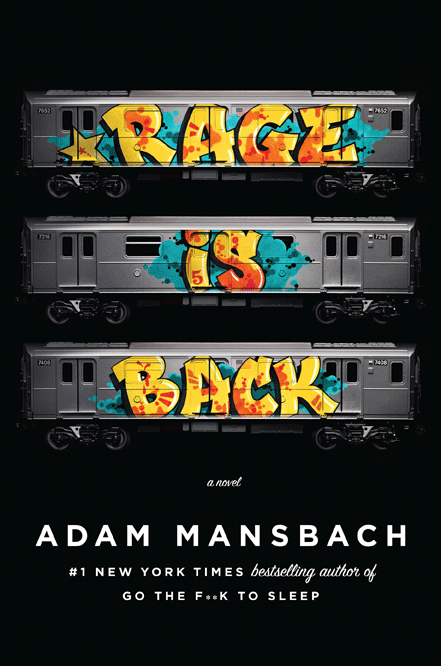 Cult hero Adam Mansbach (Go the F*** to Sleep) launches his latest novel: Rage is Back. Artwork by graffiti legend and cover artist Blake “KEO” Lethem will be displayed on the Arena walls. J.PERIOD will be DJing.

About Rage is Back:

Adam Mansbach, the author of the #1 New York Times bestseller Go the F**k to Sleep, returns with a fearless new novel RAGE IS BACK about a too-wise kid and the father who left him, the price of revenge and the greatest graffiti stunt New York City has ever seen.

The narrator of RAGE IS BACK is Kilroy Dondi Vance, an eighteen-year-old mixed-race Brooklynite who deals pot and goes to prep school on scholarship, all while growing up in the shadow of his absentee father Billy Rage, a legendary graffiti writer who disappeared from New York City in 1989 following a public feud with MTA police chief Anastacio Bracken. Now it’s 2005. Bracken is running for mayor of New York City. And who should Dondi discover on a rooftop in Brooklyn but his father, newly returned to the city and ready to settle the score. The return of Rage and the mayoral race of Bracken prompt a reunion of every graffiti writer who mattered in the 1980s as they plan the greatest graffiti stunt New York City has ever seen.

RAGE IS BACK delivers a mind-bending journey through a subterranean world of epic heroes and villains. Moving through the city’s unseen communities, from the tunnel camps of the Mole People to the drug dens of Crown Heights, RAGE IS BACK is many things: a dramatic, hilarious thrill ride and a love letter to New York that introduces the most powerful urban underdog narrator this side of The Brief Wondrous Life of Oscar Wao. Adam Mansbach‘s books include the #1 international bestseller Go the F*** to Sleep, the California Book Award-winning novel The End of the Jews, and the cult classic Angry Black White Boy. His fiction and essays have appeared in The New York Times Book Review, Esquire, GQ, The New Yorker, The Los Angeles Times, The Boston Globe and on NPR’s All Things Considered. He lives in Berkeley, California.

J.PERIOD is hailed as one of “the worldÊ¼s top DJs” (NY Times). Recruited for remix and production work by Grammy-winners Kanye West, Mary J. Blige, John Legend & The Roots, J.PERIOD is one of the music industry’s most respected DJ/Remixers, and one of its most innovative viral brand-builders. With clients from major record labels (Geffen, Interscope, Sony) to lifestyle brands (TDK, Ecko, Diageo) to artist management teams (Q-Tip, The Roots), J.PERIOD’s skills have earned praise from hip hop’s elite, plus widespread critical acclaim from fans and writers around the globe.

Blake “KEO” Lethem: as KEO, he became an all-city graffiti writer and as Lord Scotch, he became a lyrical mainstay of Brooklyn ciphers. Whatever you call him, Blake (who is also the brother of famed author Jonathan Lethem) was one of the earliest white people to make a name for himself in NYC’s thriving hip-hop scene.