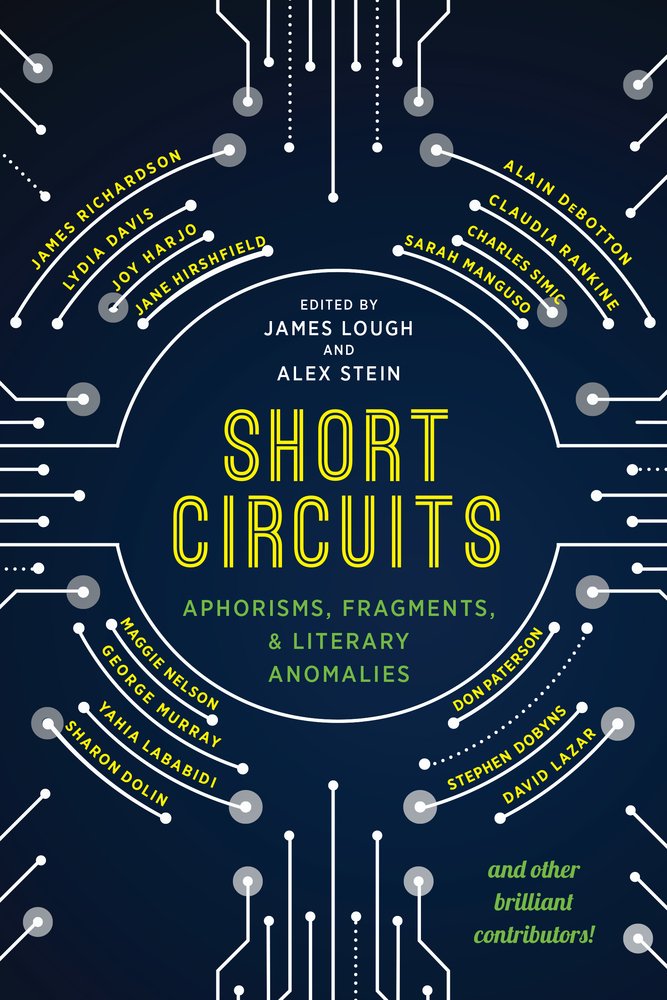 About the Book.
The Guardian reported in 2015 that thanks to smartphones, humans now have shorter attention spans than goldfish. But what if reading short-form writing can be good for you?

“The very technology that may seem to threaten literature is, in fact, affirming the profound ways that literature is uniquely vital to our minds and our lives,” writes James Lough in the introduction to Short Circuits: Aphorisms, Fragments, and Literary Anomalies. “It has now been confirmed by brain science and cognitive psychology: words change consciousness.”

Lough points to scientists who have studied how short writing can shake up our “mental sets,” or the conceptual ruts in which our thoughts run. According to neuroscientist Andrew Newberg and his partner Mark Robert Waldman, cognitive surprises like those offered by aphorisms can do this. Repeated exposure to “little enlightenments” rewires neurological pathways and “improves our inner state of well-being and our ability to cooperate with others without conflict.”

This kind of thinking about words and the brain prompted Lough and Stein to choose the title Short Circuits for the follow up to their first anthology, Short Flights: Thirty-Two Modern Writers Share Aphorisms of Insight, Inspiration, and Wit, published by Schaffner Press in 2015. For Short Circuits they expanded their call for submissions to include other short writing like flash fiction, mini-essays, and concrete poetry. The result is a collection of short works by 64 writers, including Claudia Rankine, Maggie Nelson, Joy Harjo, Alain de Botton, Charles Simic, Charlene deGuzman, Lydia Davis, Stephen Dobyns, Sarah Manguso, and many more.

One new kind of short-form writing in Short Circuits is “literary personae,” or writing with a larger-than-life persona or mask. Twitter has made a home for writers working this way, including Short Circuits contributor William Pannapacker who tweets @WernerTwertzog. Pannapacker writes that his character is “based on Werner Herzog, but he is not limited by him. Twertzog tweets things that Herzog might not say but that Twitter followers would be pleased if he had said, in his famous Bavarian accent.”

Contributors Patrick Carr and Clayton Lamar collaborate on the popular account @dogsdoingthings, in which they assume the personae of existentialist dogs commenting, between deep drags on their cigarettes, about the absurdities of pop culture, historical events, and literature. Excerpts from both projects appear in Short Circuits.

Another new addition to this anthology is the “mini-essay,” a genre which Lough writes is “wide enough to accommodate the socially-conscious mini-memoirs by Claudia Rankine, the acute personal observations like those of Sarah Manguso and Maggie Nelson, or the dollhouse-scaled arguments by Elisa Gabbert.”

To Lough, short writing, such as aphorisms, offers more propositions than conclusions—and that’s a good thing. He writes, “Certainty constrains our openness to experience, and our interpretations of experience, by locking us inside what behavioural scientists call cognitive biases, patterns of thinking in which we’re certain something is true when in fact it may or may not be.”

Monastics in the Middle Ages and Zen practitioners have also used very short literary forms to alter their patterns of thinking. Charles M. Jenkins describes in his book The Paradox of the Mystical Text how monks seeking mystical experiences puzzled over spiritual riddles. In the Zen tradition, koans (such as “What is the sound of one hand clapping?”) are designed to break open practitioners’ mental sets and help them reach greater enlightenment.

In Stein’s preface, he points out that short writing is not automatically better than long writing simply because it is shorter. What makes short writing unique is that it’s boiled down to its essence.

Excerpts.
Here is a small sampling of some of the short writing in Short Circuits:

“The trouble with comparing yourself to others is that there are too many others. Using all others as your control group, all your worst fears and all your fondest hopes are at once true. You are good; you are bad; you are abnormal; you are just like everyone else.” —Sarah Manguso

“It takes more than one life to be sure what’s killing you.” —James Richardson

“It takes a serious lack of imagination to have an entirely clean conscience.” —Alain de Botton

“Remembering and imagination enter and leave from the same area of the soul.” —Joy Harjo

“The real estate woman, who didn’t fathom she could have made an appointment to show her house to you, spends much of the walk-through telling your friend, repeatedly, how comfortable she feels around her. Neither you nor your friend bothers to ask who is making her feel uncomfortable.” —Claudia Rankine

“Lemon
The grated lemon rind bitters the oil it steeps in.
A wanted flavor.
Like the moment in love when one lover knows
the other could do anything now wanted, yet does not.” —Jane Hirshfield

About the Editors.
James Lough is the author of This Ain’t No Holiday Inn and Sites of Insight, which won the Publications Prize from the Colorado Endowment of the Humanities. His stories have won the 2011 America’s Got Stories Award, the Frank Waters Southwestern Writing Award for short fiction, and Electric Literature’s 280-Character Story Contest.

Alex Stein is the co-editor with James Lough of Short Flights and the author of The Artist as Mystic: Conversations with Yahia Lababidi and a book of aphorisms, Weird Emptiness.

About the Readers.
Lily Akerman lives in New York.  Her aphorisms appeared in the previous volume: Short Flights: Thirty-Two Modern Writers Share Aphorisms of Insight, Imagination, and Wit (Schaffner Press/2015)..  Her writing, in longer forms, has been published in The Stinging Fly, The Pickled Body, The Letters Page,  and Calyx, and  has  been  performed  at  the  Dublin Fringe  Festival, Cork Midsummer Festival, the Royal Irish Academy of  Music, and Princeton’s One Act Opera Project.  She is a Fulbright scholar.

Patrick Carr is half of @dogsdoingthings. He studied 20th century literature in graduate school and now works in advertising. He lives in Jersey City, New Jersey with his wife and son.

Clayton Lamar is a writer, editor, and half of @dogsdoingthings. He writes (and reads) science fiction, poetry, and other occasional forms. He studied at NYU and Rutgers and works in university education. He lives in New York.