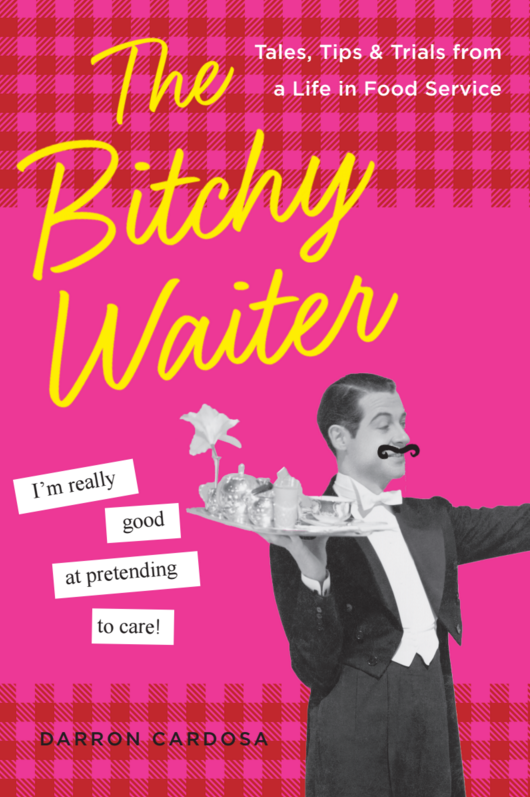 Creator of the popular blog The Bitchy Waiter Darron Cardosa distills 30 years of food service into dark, funny tales that anyone who worked in the industry will recognize and relate to.

About The Bitchy Waiter:

Millions of people have waited tables at some point in their lives. And many remain haunted by nightmare scenarios where they are the sole server in a restaurant packed with complaining customer. For all those disenchanted current and former food service employees, Darron Cardosa has your back.Since 2008 he’s vented his frustrations —about everything from crazy customers, out-of-control egos, and what really goes on in that fancy restaurant—in his popular blog The Bitchy Waiter. A snarky mix of David Sedaris, Anthony Bourdain, Erma Bombeck, and Mo Rocca, Cardosa distills 30 years of food service into dark, funny tales that anyone who worked in the industry will recognize and relate to.

Darron Cardosa proudly refers to himself as a media whore, and has been known to spend hours at a time linking his blog to every conceivable website that may get him more traffic. The Bitchy Waiter blog now boasts nearly 10,000 followers on Twitter and 250,000 fans on Facebook. In 2011 he was featured in a New York Post article entitled “Should You Trust Your Server?” He has been a guest on WOR talk radio and also on WNYC public radio. In August 2011 he appeared as a guest on Dr. Phil to discuss children’s behavior in restaurants, and in November 2011 he was a contributing commentator for CBS Sunday Morning, which reached more than five million viewers.

In August 2012 his blog was referenced in an article on CNN’s website Eatocracy.com, and in August 2013 he did a segment called “Ask the Expert” for NBC’s Today Show. Most recently he was quoted in an article about tipping for the Wall Street Journal. Darron lives in New York, NY.