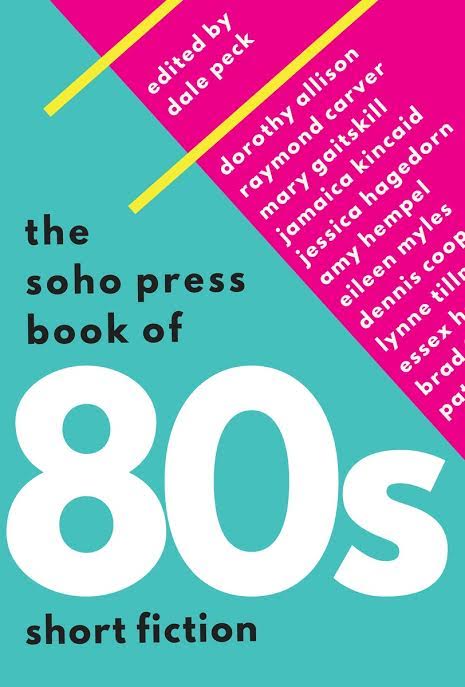 Editor Dale Peck offers readers a fresh take on a seminal period in American history, when Ronald Reagan was president, the Cold War was rushing to its conclusion, and literature was searching for ways to move beyond the postmodern unease of the 1970s.

About The Soho Press Book of ‘80s Short Fiction:

In The Soho Press Book of ’80s Short Fiction, editor Dale Peck offers readers a fresh take on a seminal period in American history, when Ronald Reagan was president, the Cold War was rushing to its conclusion, and literature was searching for ways to move beyond the postmodern unease of the 1970s.

Morally charged by newly politicized notions of identity but fraught with anxiety about a body whose fragility had been freshly emphasized by the AIDS epidemic, the 34 works gathered here are individually vivid, but taken as a body of work, they challenge the prevailing notion of the ’80s as a time of aesthetic as well as financial maximalism. Formally inventive yet tightly controlled, they offer a more expansive, inclusive view of the era’s literary accomplishments.

The anthology blends early stories from writers like Denis Johnson, Jamaica Kincaid, Mary Gaitskill, and Raymond Carver, which have gone on to become part of the American canon, with remarkable and often transgressive work from some of the most celebrated writers of the underground, including Dennis Cooper, Eileen Myles, Lynne Tillman, and Gary Indiana. Peck has also included powerful work by writers such as Gil Cuadros, Essex Hemphill, and Sam D’Allesandro, whose untimely deaths from AIDS ended their careers almost before they had begun. Almost a third of the stories are out of print and unavailable elsewhere.

The Soho Press Book of ’80s Short Fiction is a daring reappraisal of a decade that is increasingly central to our culture.About the Editor and Contributors:

Dale Peck is the author of twelve books in a variety of genres, including Martin and John, Hatchet Jobs, and Sprout. His fiction and criticism have appeared in dozens of publications, and have earned him two O. Henry Awards, a Pushcart Prize, a Lambda Literary Award, and John Simon Guggenheim Memorial Fellowship. He lives in New York City, where he has taught in the New School’s Graduate Writing Program since 1999.

Jessica Hagedorn is the author of the novels Toxicology, Dream Jungle, The Gangster Of Love, and Dogeaters, which won the American Book Award and was a finalist for the National Book Award in fiction. Her other works include Danger And Beauty, a collection of poetry and prose, and Burning Heart: A Portrait Of The Philippines. Hagedorn edited both volumes of Charlie Chan Is Dead: An Anthology of Contemporary Asian American Fiction, and Manila Noir, a crime fiction anthology. Her plays include Most Wanted, Stairway To Heaven, Fe In The Desert, and the stage adaptation of Dogeaters.  Upcoming projects include the stage adaptations of Lysley Tenorio’s Felix Starro, and Hagedorn’s own The Gangster Of Love.

Christopher Bram is the author of nine novels, including In Memory of Angel Clare, Almost History, and Father of Frankenstein, which was adapted into the film Gods and Monsters. A Guggenheim Fellow, he received the Bill Whitehead Award for Lifetime Achievement from the Publishing Triangle in 2003, and the Randy Shilts Award for Eminent Outlaws: The Gay Writers Who Changed America in 2013.
John Keene is the author of a novel, Annotations, a collection of short stories and novellas, Counternarratives, and a book of poems, Seismosis. He was longtime member of the Dark Room
Collective and Cave Canem. He translated Hilda Hilst’s Letters from a Seducer from the Portuguese, and has translated several other works from French and Spanish as well. He is the
recipient of an AGNI John Cheever Short Fiction Prize and a Whiting Award.
Jaime Manrique has written more than a dozen books, including Los adoradores de la luna; El cadáver de papá; Colombian Gold; Scarecrow; Latin Moon in Manhattan; My Night with Federico
Garcia Lorca; Sor Juana’s Love Poems; Twilight at the Equator; Eminent Maricones: Arenas, Lorca, Puig, and Me; The Autobiography of Bill Sullivan; Our Lives Are the Rivers; and Cervantes Street. He was awarded Colombia’s National Poetry Award for his first book of poems, as well as an International Latino Book Award, a Guggenheim Fellowship, and a Foundation for Contemporary Arts Grants to Artists Award.
Sarah Schulman’s novels are The Sophie Horowitz Story; Girls, Visions and Everything; After Delores; People in Trouble; Empathy; Rat Bohemia; Shimmer; The Child; The Mere Future; and The Cosmopolitans. Her nonfiction books are My American Histor; Stagestruck; Ties That Bind; The Gentrification of the Mind; and Israel/Palestine and the Queer Imagination. Among her many prizes are a Guggenheim Fellowship, a Fulbright, two New York Foundation for the Arts Fellowships, a Revson Fellowship, and two American Library Association Stonewall Book Awards.
Bruce Benderson is the author of several works of fiction and nonfiction, including User, Pretending to Say No, and The Romanian: A Story of Obsession, which won the Prix de Flore in France. Toward the New Degeneracy is an homage and epitaph and eulogy to the old Times Square, while Sex and Solitude examines the loss of urban spaces and rise of the Internet.