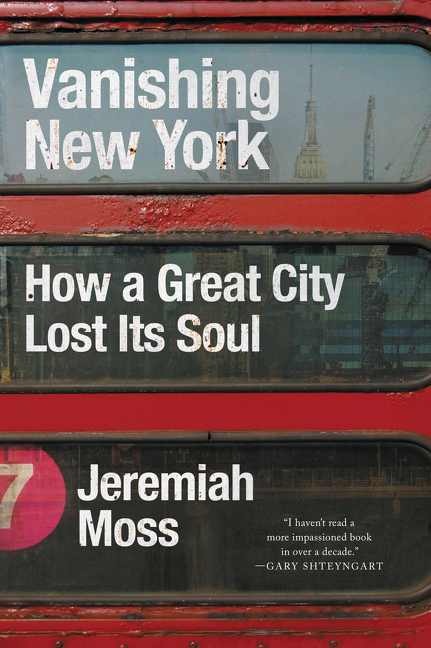 PLEASE NOTE: Submitting an RSVP for this event DOES NOT guarantee entrance. This is a free-access event — entrance will be on a first-come, first-served basis. RSVPs are used to gauge audience size and are not necessary for attendance. If the event space reaches capacity, we will form a line outside the entrance for signing line access after the reading.

New York has long been a destination for rebels and rule breakers, artists, writers, and other hopefuls longing to be part of its rich cultural exchange and unique social fabric. But today, modern gentrification is transforming the city from an exceptional, iconoclastic metropolis into a suburbanized luxury zone with a price tag only the one percent can afford.

Jeremiah Moss, author of the popular blog Jeremiah’s Vanishing New York, has spent the past decade observing and painstakingly documenting the sea change that has occurred in New York City, and has emerged as one of the most outspoken and celebrated critics of this dramatic shift.

Now, in Vanishing New York: How a Great City Lost Its Soul, he reports on the city’s development in the twenty-first century, a period of “hyper-gentrification” that has resulted in the shocking transformation of beloved neighborhoods and the loss of treasured unofficial landmarks.

Moss moved to New York in 1993—unaware that the early 1990s was quite possibly the worst moment to fall in love with and get attached to the city. As Moss describes it, that was the beginning of the end. In Vanishing New York, he leads us on a colorful guided tour of the most changed parts of town—from the Lower East Side and Chelsea to Harlem and Williamsburg—lovingly eulogizing iconic institutions as they’re replaced with soulless upscale boutiques, luxury condo towers, and suburban chains.

An unflinching portrait of gentrification in the twenty-first century and a love letter to lost New York, propelled by Moss’s hard-hitting cantankerous style, Vanishing New York is a staggering examination of contemporary “urban renewal,” its roots, and its repercussions—not only for New Yorkers, but for all of America and the world. Jeremiah Moss, creator of the award-winning blog Vanishing New York, is the pen name of Griffin Hansbury. His writing on the city has appeared in The New York Times, The Daily News, and online at The New Yorker and The Paris Review. As Hansbury, he is the author of The Nostalgist, a novel, and works as a psychoanalyst in private practice in New York City.

Judy McGuire is a recovering advice columnist/turned-just-plain-writer who has lived in three of the city’s five boroughs. She’s the author of How Not to Date, The Official Book of Sex, Drugs, and Rock ‘n’ Roll Lists, and has ghostwritten several top-secret projects you’ll have to get her liquored up to discuss. You can find her on Twitter at @HitOrMissJudy or Instagram at @bad_advice.