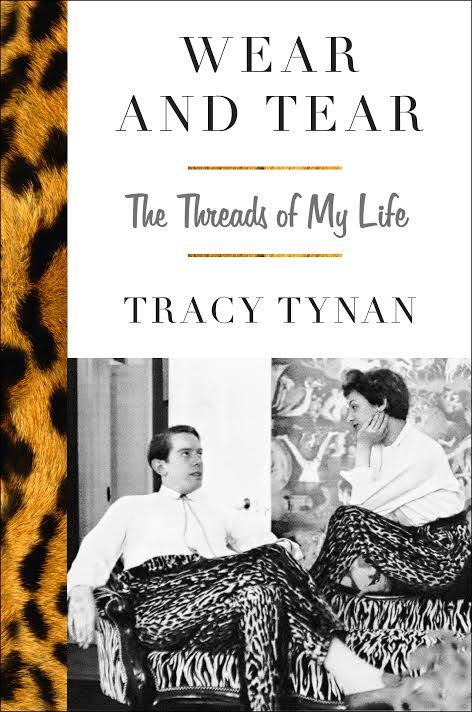 Tynan tackles issues big and small using clothes as an entrée—relationships, mortality, and her work as a costume designer are all recounted with humor, with insight, and with the special joy that can only come from finding the perfect outfit.

About Wear and Tear:
“Rich in humor and observation, its stylish tone belies the often harrowing nature of [Tynan’s] formative years, and details with bravery and precision exactly who she was and what she wore.” Anjelica Huston, author of A Story Lately Told and Watch Me

Tracy Peacock Tynan grew up in London in the 1950’s and 60s, privy to her parents’ glamorous parties and famous friends—Laurence Olivier, Vivien Leigh, and Orson Welles. Cecil Beaton and Katharine Hepburn were her godparents. Tracy was named after Katherine Hepburn’s character, Tracy Lord, in the classic film, The Philadelphia Story. These stylish showbiz people were role models for Tracy, who became a clotheshorse at a young age.

Tracy’s father, Kenneth Tynan, was a powerful theater critic and writer for the Evening Standard, The Observer, and The New Yorker. Her mother was Elaine Dundy, a successful novelist and biographer, whose works have recently been revived by The New York Review of Books. Both of Tracy’s parents, particularly her father, were known as much for what they wore as what they wrote.

In the Tynans’ social circles, style was essential, and Tracy had firm ideas about her own clothing for as long as she can remember. Shopping was an art passed down through the family; though shopping trips with her mother were so traumatic that Tracy started shopping on her own when she was fourteen.

When Tracy started writing about her life she found that clothing was the focus of many of her stories. She recalls her father’s dandy attire and her mother’s Pucci dresses, as well as her parents’ rancorous marriage and divorce, her father’s prodigious talents and celebrity lifestyle, and her mother’s lifelong struggle with addiction. She tackles issues big and small using clothes as an entrée—relationships, marriage, children, stepchildren, blended families, her parent’s decline and deaths, and her work as a costume designer are all recounted with humor, with insight, and with the special joy that can only come from finding the perfect outfit.

About the Author and Moderator:
Tracy Tynan is a costume designer and writer living in Los Angeles. Her credits include the movies The Big Easy,Blind Date, Great Balls of Fire, and Tuesdays with Morrie.

Cintra Wilson is a playwright, novelist, and a past columnist for the San Francisco Examiner, Salon, and the New York Times. She lives in New York City.