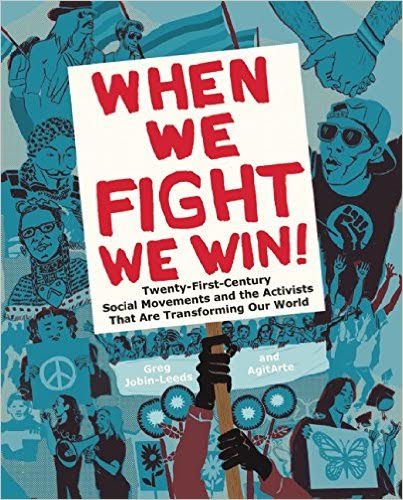 Greg Jobin-Leeds joins forces with AgitArte’s Deymirie Hernández and José Jorge Díaz to present this tribute to the modern activists that are transforming our world.  Activist leaders Rachel Schragis, Felipe Sousa-Rodríguez, Isabel Sousa-Rodríguez, Che Gosset, Manissa McCleave Maharawal, Lily Paulina, and more will speak on their respective movements.
About When We Fight, We Win!:

“Looking at the problems of the world, it is easy to succumb to despair… To that understandable but grim malady this wonderful book is an inspiring antidote. When We Fight, We Win! portrays vividly, and creatively, how alone we may seem small, but together we can become a powerful force to make a better world. A timely and impressive work.”   —Noam Chomsky, MIT professor of linguistics, emeritus

In When We Fight, We Win! Twenty-First-Century Social Movements and the Activists That Are Transforming Our World, longtime social activist Greg Jobin-Leeds joins forces with AgitArte—a collective of innovative artists and organizers—to capture the stories, philosophies, tactics, and art of six of today’s most pressing movements: immigrant rights, the LGBTQ movement, the fight for quality public education, the prison justice movement, the struggle for economic power, and the environmental movement.

With a foreword by Colorlines’ Rinku Sen and an afterword by celebrated author Antonia Darder, When We Fight, We Win! weaves together personal interviews with today’s most successful activists and artists—from Patrisse Cullors-Brignac, Bill McKibben, Clayton Thomas-Müller and Karen Lewis to Favianna Rodríguez, Rea Carey, and Gaby Pacheco.  Distilling the collective wisdom of hundreds of activists, academics, political organizers, and movement leaders, Jobin-Leeds found that 7 key practices emerged…

Each chapter of When We Fight, We Win! shows these attributes in action:

Paulina Helm-Hernández at Southerners on New Ground and Rea Carey at the National LGBTQ Taskforce show the cutting edge of a movement in which new conversations and definition about sexuality, gender and identity are emerging.  Marriage equality is one step in a larger liberation movement that is thinking beyond the traditional fragmented male/female, gay/straight binary. Conversations with these transformers reveal something equally profound: their identities go beyond sexuality into race and class as well.  They reclaim their wholeness as they celebrate love.

Chapter 2: Grounded in Community: The Fight for the Soul of Public Education

In Chicago, teachers, students, parents, and community leaders are creating a social economic movement, energized by a community-based teachers union, to defend public education against a powerful mayor seeking to privatize education and close schools in the most vulnerable neighborhoods. Chicago’s organizing has become a nationally visible, exciting beacon of hope.

The United States has more people in prison than any other country on the planet.  The transformative visions of the prison justice movement challenge us to understand the racist and capitalist underpinnings of the prison industrial complex and to imagine a world without jails. Patrisse Cullors-Brignac (one of the founders of #BlackLivesMatter), Angela Davis, Michelle Alexander, and Walidah Imarisha powerfully illustrate incarceration’s relationship to social control, and their words, art, visions, and actions inspire us to imagine what seemed impossible.

Chapter 4: The Power of Stories: The DREAMers and Immigrant Rights

Inspiring thousands of immigrants to come out of the shadows, the DREAMers are no longer afraid or ashamed of being undocumented.  The Trail of Dreams—a youth-led immigrant group—marched from Florida to the White House, bringing attention to a national effort to make it possible for immigrant youth to remain in the United States and go to college.  Their stories are helping to transform a broken immigration system and restore dignity to millions of undocumented Americans.

Chapter 5: “When We Fight, We Win!”: The Struggle for Economic Power

Occupy Wall Street, anti-eviction activists, and the organizing of restaurant workers are three stories in the modern economic justice movement that inspire increasing activism. Thanks to their bold organizing and the larger movement, the notion of the 99 percent, the need to democratize who holds economic power, and alternatives that put people before profits are now part of the public narrative.  These economic justice organizers are fighting to disrupt and change the inequitable status quo.

Chapter 6: Environmental Warriors: Going to the Root of the Problem

A global networked environmental movement is on the rise.  Indigenous activist, Clayton Thomas-Müller, the LA Bus Riders Union, and 350.org are three of the stories that delve into how transformative organizing goes to the root causes of problems, as opposed to focusing only on short-term solutions. Bill McKibben speaks of “the perverse logic of capitalism: the fact that it’s extremely profitable to pollute…. There can be no real answer to our climate woes that doesn’t address the insane inequalities and concentrations of power that are helping to drive us toward this disaster.”

Emphasizing the value of collective power, Greg Jobin-Leeds says, “When we fight—building an organization, joining a community of activists—we win not only communal victories but also our own personal transformation, enabling us to discover common root causes to problems that had seemed unconnected before. Understanding root causes can ally us with others—across issues, cultures, identities.  This aggregates individual fights into broad movement struggles, and by working in solidarity together we can realize far-reaching, system change.”

A visually rich and deeply inspiring book, When We Fight, We Win! gives a whole generation of readers the chance to celebrate and benefit from a remarkable decade of activism—a decade that shows just how ripe these times are for social transformation.

About the Authors:
Greg Jobin-Leeds is co-chair of the Schott Foundation for Public Education.  He has helped launch many high-impact social change organizations and lives in Cambridge, Massachusetts.  Deymirie Hernández, José Jorge Díaz, and José “Primo” Hernández are members of AgitArte, an artist and organizing collective that facilitates projects of cultural solidarity with workers and marginalized communities that is based in San Juan, Puerto Rico and Boston, Massachusetts.