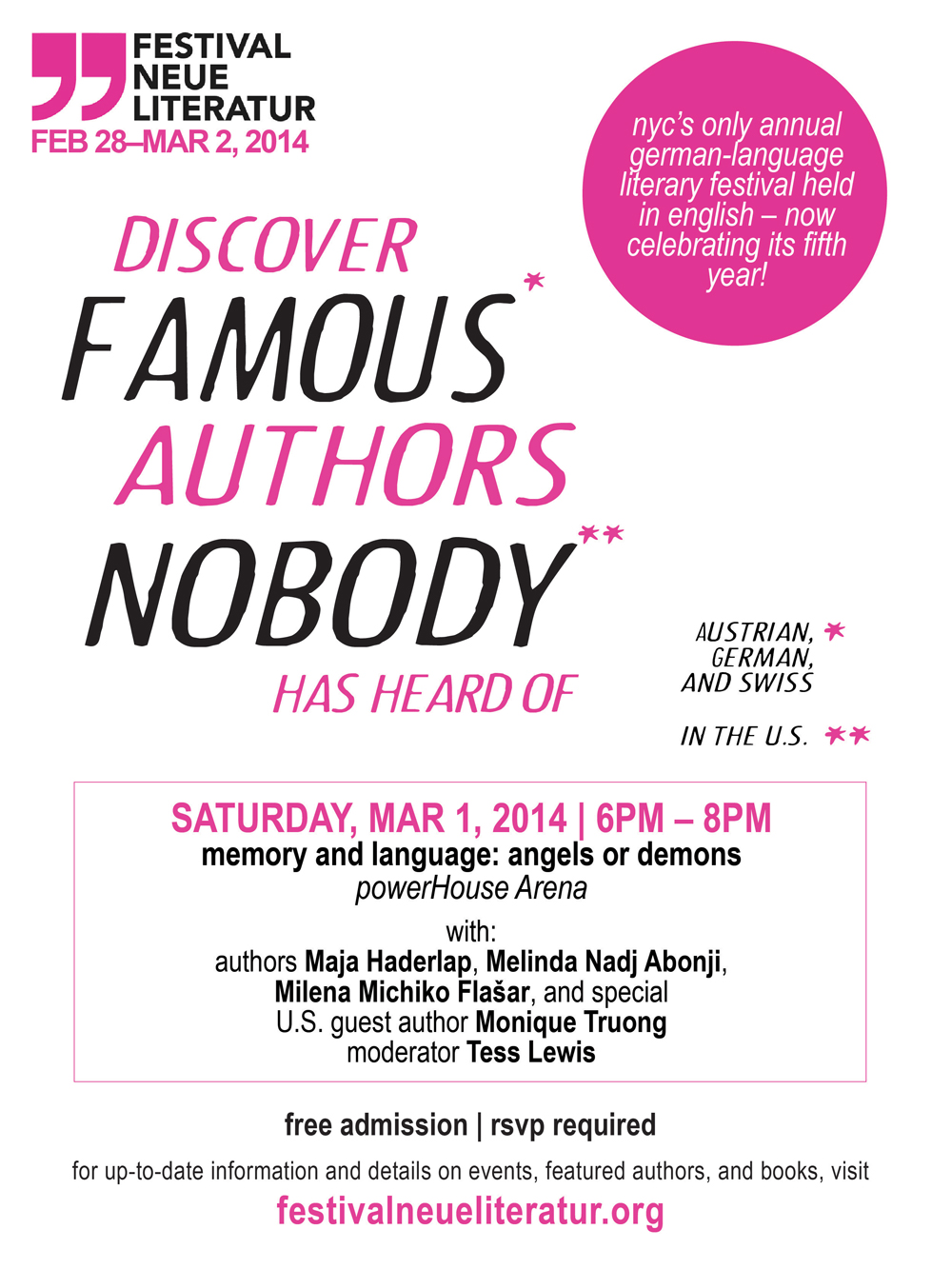 Three German-language authors and a US author discuss the extent language determines identity and one’s understanding of the world. The Hudson Review’s Tess Lewis moderates.

February 2014 will see the annual installment of New York’s only German-language literary festival held in English, Festival Neue Literatur. This will be the fifth time New York City plays host to six authors from Austria, Germany, and Switzerland. These authors are literary stars in the German-language world – but their oeuvre still remains to be discovered by U.S. audiences.

Festival curator Tess Lewis has invited Milena Michiko Flasar and Maja Haderlap (Austria), Olga Grjasnowa and Abbas Khider (Germany), Melinda Nadj Abonji and Richard Weihe (Switzerland) to participate in the four-day festival, which will include readings and panels at venues throughout the city.

Every winter, the festival also pairs the six visiting authors with two U.S. authors, who bring an American perspective and sensibility to these events, creating a dynamic of literary exchange and discourse. Former U.S. guests have included Chris Adrian, Joseph O’Neill, Francine Prose, and Joshua Ferris, among others. The 2014 festival will proudly feature two celebrated American writers, the Vietnamese-American novelist Monique Truong and novelist, journalist, and co-founder of the literary magazine n + 1, Keith Gessen.

Maja Haderlap, born in Eisenkappel/Zelezna Kapla (Austria), studied theatre studies and German at the University of Vienna. From 1992 to 2007, she was Head of Dramaturgy at the Municipal Theatre of Klagenfurt, and holds annual classes at the Institute for Applied Cultural Sciences at the Alpen Adria University there. Since 2008 she has lived and worked as a freelance author in Klagenfurt. She has published volumes of poetry and essays in Slovenian and German, and translations from Slovenian. Engel des Vergessens [Angels of oblivion] is her first novel.
Born in 1968 in Becsej, Vojvodina, Melinda Nadj Abonji earned a master’s degree in German and history in Zurich, where she now lives as an author and musician (violin and vocals). Since 1998 she has collaborated with poet and beatboxer Jurczok 1001 (text performance, music, theatre). A lecturer from 2003 to 2009 at Zurich Teachers’ College, where she led a writing workshop, and has led her own writing workshop since 2007. Nadj Abonji’s first novel, Im Schaufenster im Frühling [In the showcase in spring], was published in 2004 and has been the recipient of numerous awards. Tauben fliegen auf [Falcons without falconers], her second novel, won the German as well as the Swiss Book Prize in 2010.

Milena Michiko Flašar was born in 1980 in St. Pölten, Austria, to a Japanese mother and Austrian father. Following studies in Berlin she lives in Vienna as a writer and German teacher. Her publications include [Ich bin] ([I am]) (2008) and Okaasan – Meine unbekannte Mutter [Okaasan – my unknown mother] (2010). Flašar was nominated for the 2012 German Book Prize for her third novel, Ich nannte ihn Krawatte (I called him necktie)(Verlag Klaus Wagenbach), She has been awarded several grants and awards, including the 2012 Alpha Literaturpreis.

Monique Truong, born in 1968 in Saigon, is the author of Bitter in the Mouth (Random House, 2010), named a 10 Best Fiction Books of 2010 by Hudson Booksellers and the adult fiction Honor Book by the Asian Pacific American Librarians Association, among other honors. Her first novel, The Book of Salt (Houghton Mifflin, 2003), received the New York Public Library Young Lions Fiction Award, the Bard Fiction Prize, the Stonewall Book Award-Barbara Gittings Literature Award, and an Association for Asian American Studies Poetry/Prose Award, a.o., in addition to being named a New York Times Notable Fiction Book, and one of the Village Voice‘s 25 Favorite Books. Truong was also
a contributing co-editor of Watermark: An Anthology of Vietnamese of Vietnamese American Poetry & Prose (Asian American Writers’ Workshop, 1998).

Tess Lewis’s translations from French and German include works by Peter Handke, Alois Hotschnig, Julya Rabinowich, Philippe Jaccottet, Pascal Bruckner and Jean-Luc Benoziglio. She has been awarded Translation grants from PEN USA and PEN UK and an NEA Translation Fellowship.  She also serves as an Advisory Editor for The Hudson Review and writes essays on European Literature for numerous journals and newspapers.