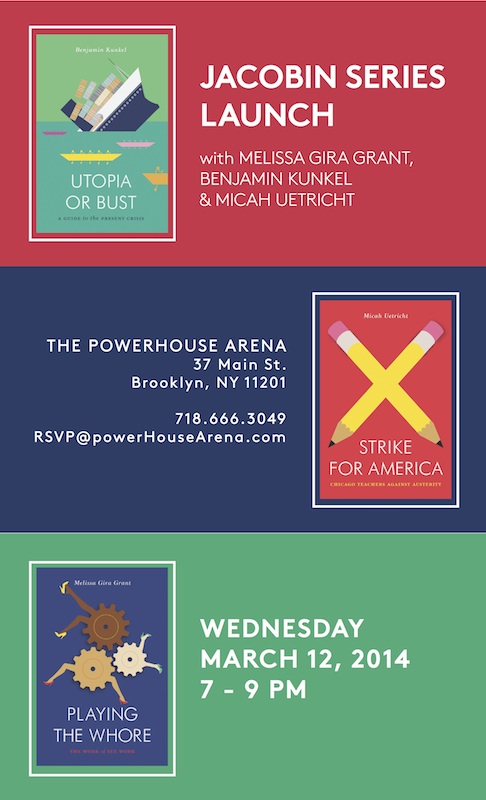 Co-edited by Jacobin magazine, this series highlights engaged young activists and thinkers with timely polemics on current events and issues. Bhaskar Sunkara of Jacobin will moderate a discussion with Gira Grant, Kunkel, and Uetricht.

About Playing the Whore:

The sex industry is an endless source of prurient drama for the mainstream media. Recent years have seen the proliferation of stories focused on the intersection between the internet and sex work and breathless reports on the supposed increase in human trafficking. The panic over “online red-light districts,” which are said to seduce vulnerable young women into a life of degradation, New York Times columnist Nicholas Kristof’s live tweeting of a Cambodian brothel raid, and the work of “video vigilantes” like JohnTV typify the fearful, salacious stories about sex work told by news organizations and the high-profile NGOs that see themselves as the saviors of helpless young women.

Rarely do such stories come from sex workers themselves, and rarely do they deviate from the position that sex workers must be rescued from their condition, and the industry simply abolished—a position common among feminists and conservatives alike.

In Playing the Whore, journalist Melissa Gira Grant turns these pieties on their head, arguing for an overhaul in the way we think about sex work. Based on ten years of writing and reporting on the sex trade, and grounded in her experience as an organizer, advocate, and former sex worker, Playing the Whore dismantles pervasive myths about sex work, criticizes both conditions within the sex industry and its criminalization, and argues that separating sex work from the “legitimate” economy only harms those who perform sexual labor.

Sex workers’ demands, too long relegated to the margins, take center stage in Playing the Whore. Demonstrating how distorted the popular conception of sex work has become, and the scant attention our society pays to the concerns of those who make their livelihood from it, the book affirms that sex work is work, and sex workers’ rights are human rights.

About Utopia or Bust:

After the financial crash and the great recession, the media rediscovered Karl Marx, socialist theory, and the very idea that capitalism might be fallible.

In spite of the publicity, the main paths of contemporary critical thought have gone unexplored outside of the academy. Benjamin Kunkel’s Utopia or Bust leads readers — whether politically committed or simply curious — through the most important critical ideas today.

Written with the wit and verve of Kunkel’s best-selling novel, Indecision, this accessible introduction to contemporary Leftist thinkers engages with the most prominent and exciting political thought today: from the revolutionary philosophy of Slavoj Žižek and the economic analyses of David Graeber, David Harvey, and Robert Brenner, to the cultural diagnoses of Frederic Jameson and Boris Groys.

“Theory,” writes Kunkel, “and writing about theorists, brings no victories by itself… Still, for at least a generation now, not only the broad public but many radicals themselves have felt uncertain that the left possessed a basic analysis of contemporary capitalism, let alone a program for its replacement.”

This book shows that this feeling has been misplaced. Discussing the ongoing crisis of capitalism in light of the ideas of full employment, debt forgiveness, and “fictitious capital,” Utopia or Bust is a tour through the world of contemporary Marxist thought that shows the groundwork has been laid for a post-capitalist future.

About Strike for America:

The 2012 Chicago Teachers Union strike was the most important domestic labor struggle in decades, and the strongest challenge to the bipartisan, free market education reform agenda that fosters education inequality using teachers as a scapegoat. In an age of austerity, when public education and the public sector generally are under attack, Chicago teachers fought back—and won.

Far from being spontaneous, the strike was years in the making. Standing up against a hostile Democratic mayor, billionaire- backed reformers out to destroy unions, and even their own intransigent union leadership, Chicago teachers had been building a grassroots movement that engaged and educated the entire union membership, and was unafraid to take militant action.

Written by Micah Uetricht, a progressive journalist and former labor organizer who was on the scene for the entire strike, Strike for America is a blow-by-blow account of how CORE, a rank-and-file caucus of the CTU, lead this movement, elected Karen Lewis as the union’s president, and launched a successful strike against neoliberal reform. Working closely with parents and community members, CORE developed an agenda that went beyond the usual compensation negotiations in order to establish a broad coalition opposed to the market-driven education policies backed by the previous union leadership.

More than local heroes, Chicago teachers have created a model for true school reform, shaped by the the community rather than the private sector. The movement is an inspiration for workers looking to create democratic unions that fight for the issues that matter to their members, and for anyone committed to resisting austerity measures.

Strike for America tells the story of how this movement came together in Chicago, and how its success will inform the defining struggles for workers today.

THE JACOBIN SERIES, published in conjunction with the acclaimed magazine, features short interrogations of politics, economics, and culture from a socialist perspective, as an avenue to radical political practice. The books offer critical analysis and engagement with the history and ideas of the Left in an accessible format.
About the Authors:

Melissa Gira Grant is a writer and freelance journalist whose work has appeared in Glamour, the Guardian, the Nation, Wired, and the Atlantic. She is also a contributing editor to Jacobin. Her website is melissagiragrant.com.

Micah Uetricht is an assistant editor at Jacobin, and an In These Timescontributing editor. He has written for the Nation, the Chicago Reader, Al Jazeera America, and Dissent. A former labor organizer, he lives in Chicago.