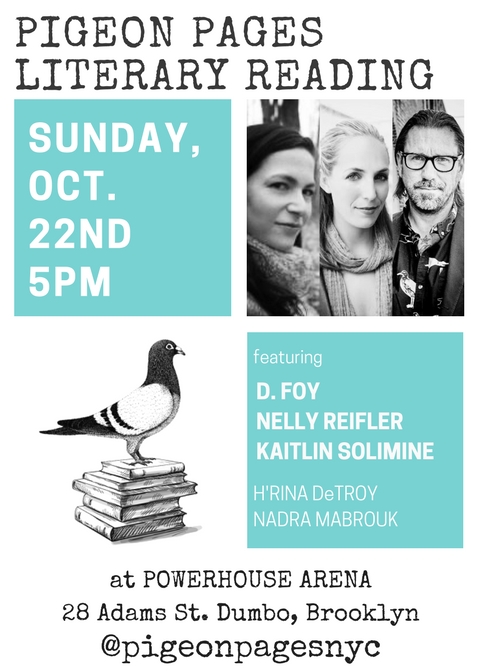 We are thrilled to announce our October Pigeon Pages reading, featuring Kaitlin Solimine, D. Foy, Nelly Reifler, H’Rina DeTroy, & Nadra Mabrouk, hosted by Alisson Wood. Our readings are always free and open to the public. Please join us on Sunday, October 22nd, 5pm! You can always find us in our online nest at pigeonpagesnyc.com. D. FOY is the author of the novels Made to Break, Patricide, and Absolutely Golden. His stories, poems, and essays have appeared in Guernica, Literary Hub, Salon, Hazlitt, Post Road, Electric Literature, BOMB, The Literary Review, and the Georgia Review, among many others, and have been included in the books Laundromat, A Moment’s Notice, and Forty Stories: New Writing from Harper Perennial.www.dfoyble.com.

NELLY REIFLER is the author of a story collection, See Through, and a novel, Elect H. Mouse State Judge. Her stories have appeared in McSweeney’s, BOMB, jubilat, Story, and Lucky Peach, among others; anthologized in books such as Lost Tribe: Jewish Fiction from the Edge and Found Magazine’s Requiem for a Paper Bag; and heard on Se​lected Shorts. She is a Recommendations editor at Post Road and teaches at Sarah Lawrence College.

KAITLIN SOLIMINE is the co-founder of HIPPO Reads and author of debut novel, Empire of Glass, which was Short-Listed for the Center for Fiction’s First Novel Prize. Raised in New England, Kaitlin has considered China a second home for almost two decades. While majoring in East Asian Studies at Harvard University, she was a Harvard-Yenching scholar and wrote and edited Let’s Go: China. In 2006-2007, she was a U.S. Department of State Fulbright Creative Arts Fellow in China where she began work on Empire of Glass. She was the Donald E. Axinn Scholar in Fiction at the Bread Loaf Writers’ Conference (2010) and graduated from the MFA program in writing at UC-San Diego (2011). She is the 2012 recipient of the Dzanc Books/Disquiet International Literary Program award and has been a resident at the Vermont Studio Center.

H’RINA DeTROY has a knack for finding strange things. Once she found an old, rusty musket ball in a broken patch of pavement in DUMBO. Almost a decade before that, she found a human head in a garden. The New York Post headline read, Girl Finds Human Head in Bedstuy Garden. That was a bad day. Her essay, The Vengeance of Elephants won the 2017 Curt Johnson Prose Award and will be published in december magazine next month. Her essay Knot was published in the anthology, Borderlands and Crossroads: Writing the Motherland by Demeter Press. She’s an alum of Hunter College’s Creative Writing MFA, the VONA/Voices Residency and CUNY’s Graduate Journalism School. She teaches writing at Harlem Children’s Zone and Hunter College. She also dances flamenco.

NADRA MABROUK‘s work has appeared in RHINO, The Boiler Journal, and others. Her chapbook, How Things Tasted When We Were Young, was published in 2016. She is currently pursuing her MFA at New York University as a Goldwater Fellow, where she is Assistant Web Editor for Washington Square Review.

ALISSON WOOD’s essays, stories, and poems have appeared in places such as The New York Times, Catapult, NY Yoga + Life Magazine, Dovetail, Stillwater, and Salad Days Substance. Currently, she’s a candidate for an MFA in Fiction at NYU where she’s Assistant Managing Editor of their literary magazine Washington Square. She is the founder and curator of the Pigeon Pages NYC reading series and also serves as editor for the Pigeon Pages Journal. You can find her online at alissonwood.com