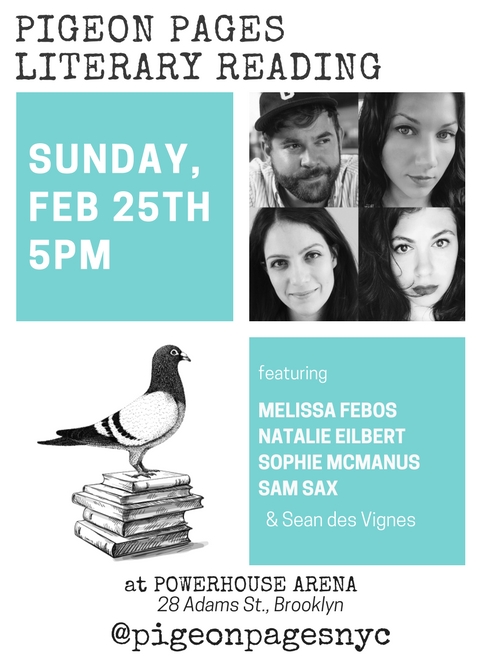 On Sunday, February 25th at 5pm, Pigeon Pages NYC will be hosting:

About Your Readers.
MELISSA FEBOS is the author of the acclaimed memoir, Whip Smart (St. Martin’s Press 2010), and the essay collection, Abandon Me (Bloomsbury 2017), an Indie Next Pick that The New Yorker called “mesmerizing,” and was named a Best Book of 2017 by Esquire, Book Riot, The Cut, Electric Literature, Bustle, Medium, Refinery29, The Brooklyn Rail, Salon, The Rumpus, and others. Her second essay collection, Girlhood (Bloomsbury), will be published in 2019. Her work has appeared in The Kenyon Review, Tin House, Granta, The Believer, The New York Times, The New York Times Book Review, Salon, Guernica, Dissent, Glamour, Prairie Schooner, Poets & Writers, Lenny Letter, The Guardian, Elle, Vogue, and elsewhere, and her essays have won prizes from Prairie Schooner, Story Quarterly, and Center for Women Writers at Salem College. She is a three-time MacDowell Colony fellow, and has also received fellowships from the Bread Loaf Writer’s Conference, Virginia Center for Creative Arts, Vermont Studio Center, The Barbara Deming Memorial Fund, Ragdale, and The Lower Manhattan Cultural Council. She holds an MFA from Sarah Lawrence College and is currently an Assistant Professor of Creative Writing at Monmouth University. She serves on the Board of Directors for VIDA: Women in Literary Arts and co-curated the Manhattan reading and music series, Mixer, for ten years. She lives in Brooklyn.

SAM SAX is the author of Madness (Penguin, 2017) winner of The National Poetry Series and ‘Bury It’ (Wesleyan University Press, 2018) winner of the James Laughlin Award from the Academy of American Poets. He’s received fellowships from the National Endowment for the Arts, Lambda Literary, & the MacDowell Colony. He’s the two-time Bay Area Grand Slam Champion, author of four chapbooks & winner of the Gulf Coast Prize, The Iowa Review Award, & American Literary Award. His poems have appeared in BuzzFeed, The New York Times, Poetry Magazine, Tin House + other journals. He’s the poetry editor at BOAAT Press.

NATALIE EILBERT is the author of Indictus (Noemi, 2018), which won the 2016 Noemi Press Poetry Award. Her work has been published in Granta, The New Yorker, The Bennington Review, and elsewhere. She is the founding editor of The Atlas Review.

SOPHIE MCMANUS is the author of the critically acclaimed novel, The Unfortunates, which is a Barnes & Noble Great Writers Discover Award Finalist, was shortlisted for the Center for Fiction’s First Novel Prize, long listed for the National Book Critics Circle John Leonard Prize, and named a notable or best book by The Washington Post, Entertainment Weekly, Time, Time Out, and the Evening Standard, among others. Her work has appeared in American Short Fiction, O, Tin House, The Washington Post, and elsewhere. She teaches writing at Sarah Lawrence College, in New York.

SEAN DES VIGNES is a writer from Brooklyn, NY. He is currently a Goldwater Fellow at New York University. His work on jazz poetics can be found in Winter Tangerine and is upcoming in Vinyl. 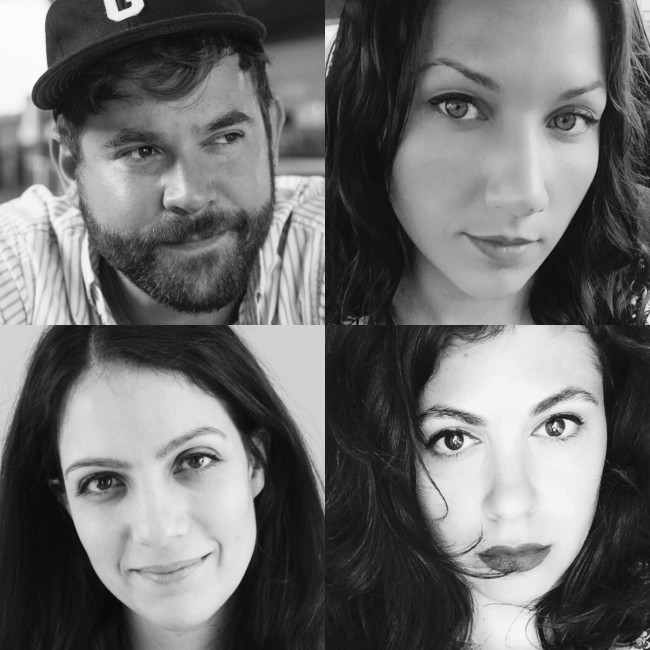 About Your Host.
ALISSON WOOD’s essays, stories, and poems have appeared in places including The New York Times and Catapult. Currently, she’s a candidate for an MFA in Fiction at NYU where she’s Assistant Managing Editor of their literary magazine Washington Square, and is a Goldwater fellow. She is also a professor of creative writing for undergraduates at NYU. She is the founder and curator of the Pigeon Pages NYC reading series and serves as editor for the Pigeon Pages Journal. You can find her online at alissonwood.com