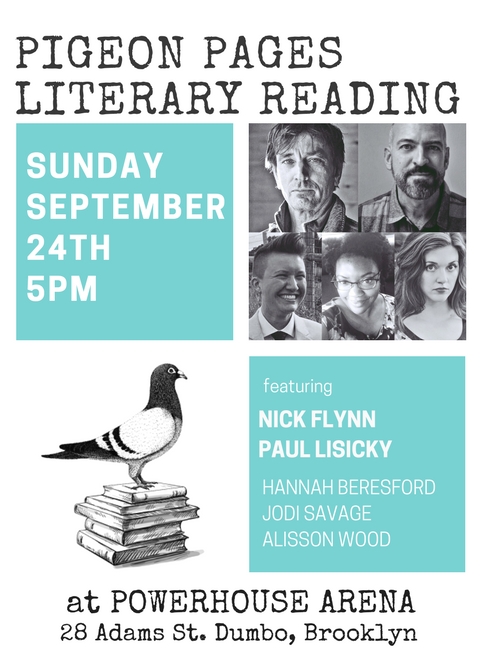 We are thrilled to announce our September line-up, featuring Nick Flynn, Paul Lisicky, Hannah Beresford, Jodi Savage, and Alisson Wood. Our readings are always free and open to the public. Please join us on Sunday, September 24th, 5pm! You can always find us in our online nest at pigeonpagesnyc.com. 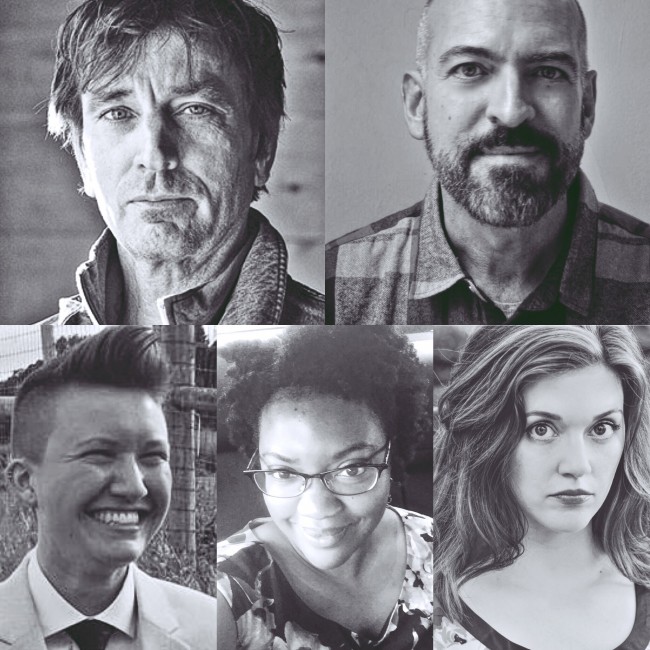 NICK FLYNN has received fellowships and awards from, among other organizations, the Guggenheim Foundation, PEN, and the Library of Congress. Some of the venues his poems, essays, and non-fiction have appeared in include The New Yorker, The Paris Review, and National Public Radio’s This American Life. He is currently a professor on the creative writing faculty at the University of Houston, where he is in residence each spring. In 2015, he published his 9th book, My Feelings (Greywolf), a collection of poems. His work has been translated into fifteen languages.

PAUL LISICKY is the author of five books: The Narrow Door (a New York Times Editors’ Choice), Unbuilt Projects, The Burning House, Famous Builder,and Lawnboy. His work has appeared in The New York Times, The Atlantic, BuzzFeed, Conjunctions, Ecotone, Fence, The Offing, Ploughshares, Tin House,and in many other magazines and anthologies. A 2016 Guggenheim Fellow, he has received awards from the National Endowment for the Arts, the James Michener/Copernicus Society, the Corporation of Yaddo, and the Fine Arts Work Center in Provincetown, where he was twice a Fellow. He has taught in the creative writing programs at Cornell University, New York University, Rutgers University-Newark, Sarah Lawrence College, the University of North Carolina Wilmington, and elsewhere. He is currently an Associate Professor in the MFA Program at Rutgers University-Camden. In Fall 2018 he will be a Visiting Professor at the University of Texas-Austin. He lives in Brooklyn, New York.

HANNAH BERESFORD, originally of the Helderberg Escarpment of upstate New York, earned her MFA from NYU after spending four years on red dirt at Oklahoma State. Her poems are published or forthcoming in The Adroit Journal, Cimarron Review, Sycamore Review, Pleiades, among others and she is the recipient of a 2017-2018 fellowship at the Provincetown Fine Arts Work Center. She serves as a poetry editor for No Tokens.

JODI M. SAVAGE is an employment discrimination attorney by day and writer by night. Her writing has appeared or is forthcoming in Catapult, The Establishment, and Women’s Studies Quarterly. She can be found online at www.jodimsavage.com and on Twitter (@macreflections). Jodi lives in Brooklyn.

ALISSON WOOD’s essays, stories, and poems have appeared in places such as The New York Times, Catapult, NY Yoga + Life Magazine, Dovetail, Stillwater, and Salad Days Substance. She is the founder and curator of the PIgeon Pages NYC reading series and also serves as editor for the Pigeon Pages Journal. You can find her online at alissonwood.com