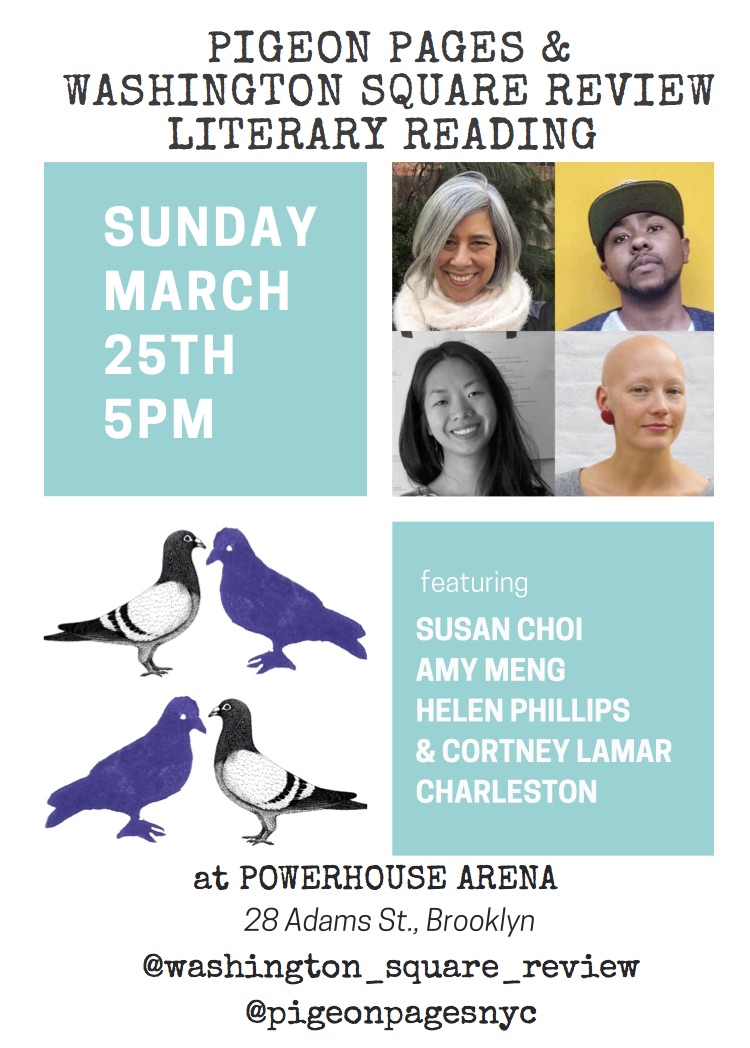 Pigeon Pages NYC & Washington Square Review are flying together on March 25th for a co-sponsored reading showcasing Susan Choi, Helen Phillips, Cortney Lamar Charleston and more, hosted by Alisson Wood. Join us for an evening full of pigeons and writers, their favorite things.

About the Readers.
SUSAN CHOI‘s first novel, The Foreign Student, won the Asian-American Literary Award for fiction. Her second novel, American Woman, was a finalist for the 2004 Pulitzer Prize. Her third novel, A Person of Interest, was a finalist for the 2009 PEN/Faulkner Award. In 2010 she was named the inaugural recipient of the PEN/W.G. Sebald Award. Her fourth novel, My Education, received a 2014 Lammy Award. Her fifth novel, Trust Exercise, will be published in 2019. A recipient of fellowships from the National Endowment for the Arts and the Guggenheim Foundation, she teaches fiction writing at Yale and lives in Brooklyn.

HELEN PHILLIPS is the author of four books, including, most recently, the short story collection Some Possible Solutions, winner of the 2017 John Gardner Fiction Book Award. Her novel The Beautiful Bureaucrat, a New York Times Notable Book of 2015, was a finalist for the New York Public Library’s Young Lions Award and the Los Angeles Times Book Prize. She is the recipient of a Rona Jaffe Foundation Writer’s Award and the Italo Calvino Prize, among others. Her work has appeared in The Atlantic Monthly, The New York Times, and Tin House, and on Selected Shorts. She is an assistant professor at Brooklyn College.

CORTNEY LAMAR CHARLESTON is the author of Telepathologies, selected by D.A. Powell for the 2016 Saturnalia Books Poetry Prize. He was awarded a 2017 Ruth Lilly and Dorothy Sargent Rosenberg Fellowship from the Poetry Foundation and he has also received fellowships from Cave Canem, The Conversation Literary Festival and the New Jersey State Council on the Arts. His poems have appeared in POETRY, New England Review, AGNI, TriQuarterly, ecotone and elsewhere. He serves as a poetry editor at The Rumpus.

AMY MENG holds degrees from Rutgers University and New York University. She is the author of Bridled (Pleiades Press, 2018) and a Kundiman Fellow. Her poetry has appeared in publications including: Gulf Coast, Indiana Review, The Literary Review, and Narrative Magazine. She currently lives in Brooklyn.

About the Host.
ALISSON WOOD’s essays, stories, and poems have appeared in places including The New York Times and Catapult. Currently, she’s a candidate for an MFA in Fiction at NYU where she’s Assistant Managing Editor of their literary magazine Washington Square, and is a Goldwater fellow. She is also a professor of creative writing for undergraduates at NYU. She is the founder and curator of the Pigeon Pages NYC reading series and serves as editor for the Pigeon Pages Journal. You can find her online at alissonwood.com