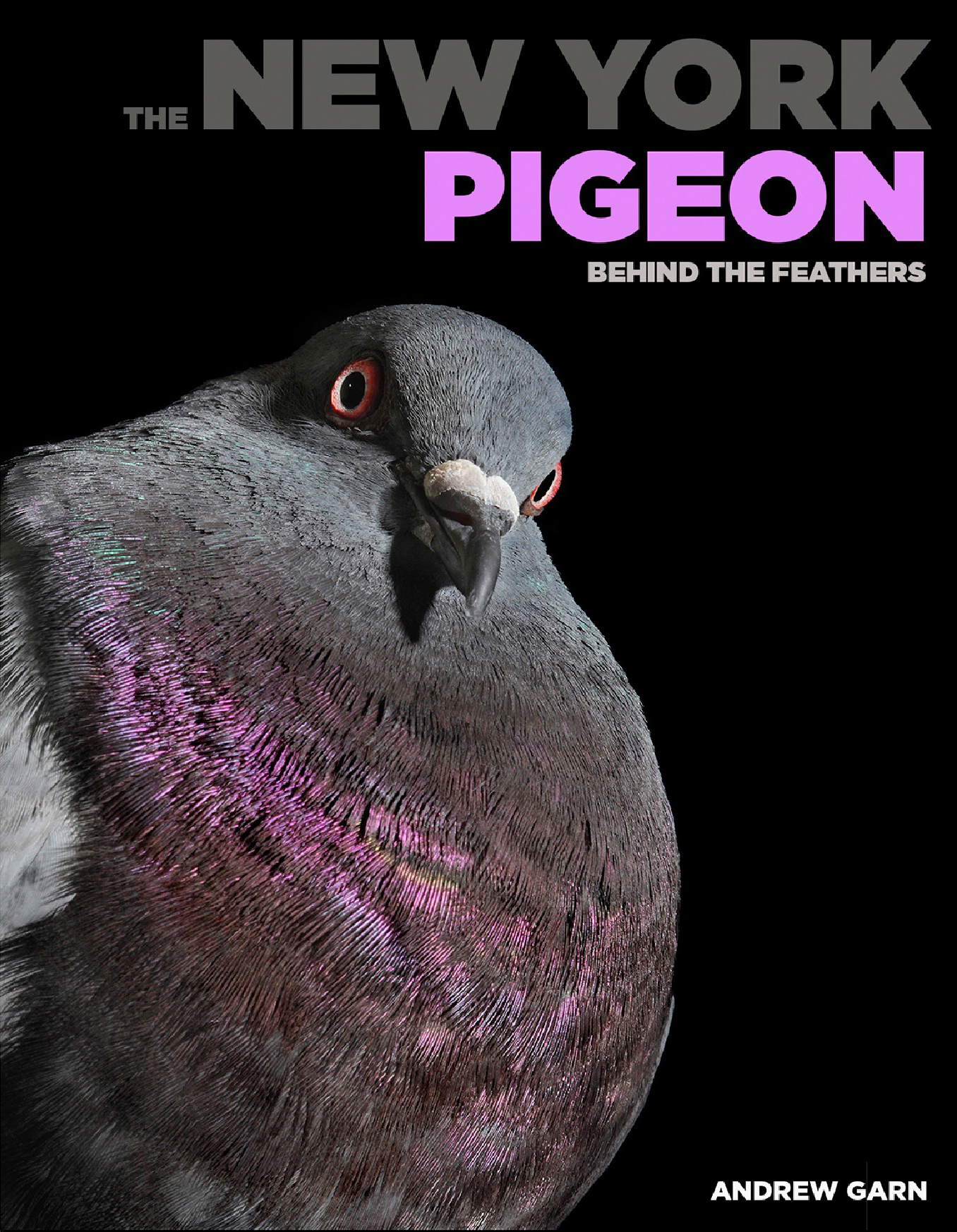 About the Book.
The New York Pigeon is the product of eight years of passionate photographic inquiry of pigeons’ undeniable power and allure. As seen on the cover of New York magazine and The New York Times, Garn’s dramatic, hyper-real studio portraits capture the personalities, expressiveness, the glorious feather iridescence, and deeply-hued eyes of our often overlooked, city-dwelling brethren. High-speed strobe photography illustrates their graceful flight and dramatic wing movements (as featured in Audubon magazine).

While The New York Pigeon is primarily a photography book, it also tells the five-thousand-year story of the feral pigeon. Why are pigeons so successful in cities? Why do they have such diverse plumage? How have pigeons adapted to survive on almost any food? Why are they able to fly up to 500 miles per day, but rarely do?

The book also examines how Harvard psychologist B.F. Skinner taught pigeons to do complicated tasks, including tracking missile targets and playing competitive games. We also learn how pigeons see in the ultraviolet light spectrum and that half of their brain is used for visual perception.

The New York Pigeon elevates this much-maligned bird to its rightful place, illuminating the graceful beauty of nature that is alive in New York City’s midst. (Gritty, determined, resilient and beautiful –the pigeon is a good metaphor for New York City itself). With this book, Garn invites you to take a closer look at the pigeon– you will never see them the same way again.

About the Photographer/Author.
Andrew Garn is a native New Yorker who grew up mostly oblivious to the pigeons around him. His enlightenment began in 2008, when he began photographing, rehabilitating, and observing Columba Livia. He has exhibited photographs, video installations, and sculptures of pigeons at OK Harris Works of Art in SoHo, A.M. Richard Fine Art in Brooklyn, and the American Pigeon Museum in Oklahoma City. By documenting the entire spectrum of pigeon development, including full-grown, newborns, babies and “squeakers,” he has grown to love these birds.

Mr. Garn is a fine art and editorial photographer whose work has been widely exhibited and appeared in the pages of numerous magazines including The New York Times Magazine, Fortune, Forbes, Interview, Vogue, Vibe, Time, Newsweek, Der Spiegel, French Photo, Elle Décor, New York, and Bloomberg LP. He is the recipient of grants from the Fulbright Scholarship Program, the New York State Council on the Arts, the Graham Foundation, the National Endowment for the Arts, and the J.M. Kaplan Fund, among others.

His previous books include Exit to Tomorrow: The History of the Future (Rizzoli, 2007), Subway Style: Architecture and Design of the NYC Subway (Stewart, Tabori & Chang, and the MTA, 2005), The Houseboat Book (Rizzoli/Universe, 2003), and Bethlehem Steel (Princeton Architectural Press, 2000).

About the Moderator.
​Catherine Quayle ​is a content strategist at Google and volunteer social media manager for the Wild Bird Fund. She has written about birds for Salon, Terrain, PBS and Today, and is foster mom to a rotating cast of fine New York City pigeons.