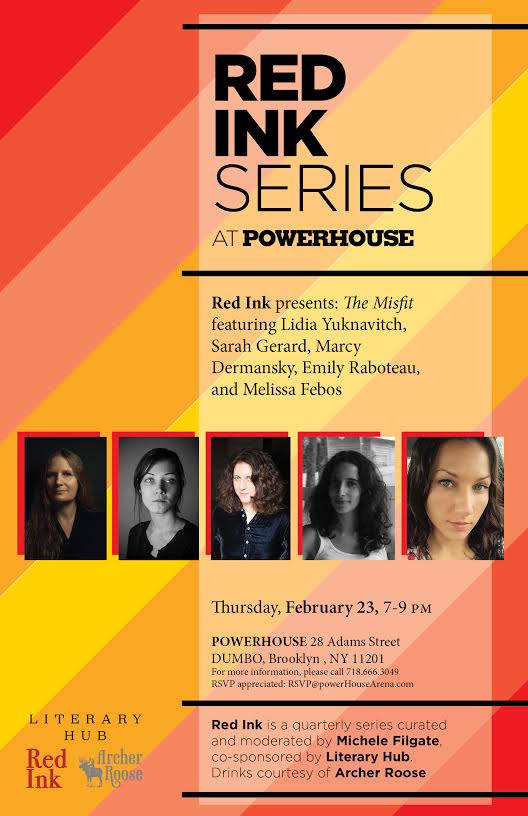 About the Red Ink Reading Series:

Red Ink is a quarterly series curated by Michele Filgate, co-sponsored by Literary Hub. Red Ink makes one think of vitality, blood, the monthly cycle, correcting history, and making a mark on the world. This dynamic series focuses on women writers, past and present. The fourth panel discussion, “The Misfit” will feature Lidia Yuknavitch (The Book of Joan and The Small Backs of Children), Sarah Gerard (Sunshine State and Binary Star), Marcy Dermansky (The Red Car and Bad Marie),  Emily Raboteau (Searching for Zion and The Professor’s Daughter), and Melissa Febos (Abandon Me and Whip Smart). This conversation is inspired by Lidia’s popular TED Talk, “The beauty of being a misfit.”

Lidia Yuknavitch is the author of the forthcoming Harper Books novel The Book of Joan, the novels The Small Backs of Children and Dora: a Headcase, and the anti-memoir The Chronology of Water. She invented the west coast Corporeal Writing Workshops. She also teaches in the low residency MFA programs at the Institute of American Indian Arts and Eastern Oregon University. Her novel The Small Backs of Children won the Oregon Book Award and the Reader’s Choice Award. She lives in Portland, Oregon with her filmmaker husband Andy Mingo and their renaissance man son, Miles. She’s still scared to watch her own TED talk. She is a very good swimmer.

Melissa Febos is the author of the memoir, Whip Smart (St. Martin’s Press 2010), and the essay collection, Abandon Me (Bloomsbury 2017).  Her work has been widely anthologized and appears in publications including The Kenyon Review, Granta, Tin House, Prairie Schooner, Glamour, Poets & Writers, Salon, New York Times,Dissent, Guernica, Lenny Letter, The Chronicle of Higher Education Review, and Bitch Magazine. She has been featured on NPR’s Fresh Air, CNN, Anderson Cooper Live, and elsewhere. Her essays have won prizes from Prairie Schooner, Story Quarterly, and The Center for Women Writers, and she is the recipient of fellowships from the Bread Loaf Writer’s Conference, Virginia Center for Creative Arts, Vermont Studio Center, Ragdale, The Barbara Deming Memorial Fund, Lower Manhattan Cultural Council, and The MacDowell Colony. She is a high school dropout with an MFA from Sarah Lawrence College, and is currently Assistant Professor of Creative Writing at Monmouth University and MFA faculty at the Institute of American Indian Arts (IAIA). She serves on the Board of Directors for VIDA: Women in Literary Arts, and co-curated the Manhattan reading and music series, Mixer, for ten years. She grew up on Cape Cod and lives in Brooklyn.

Sarah Gerard is the author of the novel Binary Star, the forthcoming essay collection Sunshine State, and two chapbooks, most recently BFF. Her short stories, essays, interviews, and criticism have appeared in The New York Times, Granta, New York Magazine‘s “The Cut”, The Paris Review Daily, The Los Angeles Review of Books, Bookforum, Joyland, Vice, BOMB Magazine, and other journals, as well as anthologies for Joyland and The Saturday Evening Post. She’s been supported by fellowships and residencies from Yaddo, Tin House, and PlatteForum. She writes a monthly column on food for Hazlitt and teaches writing in New York City.

Marcy Dermansky is the author of the novels The Red Car, Bad Marie, and Twins. Her writing has appeared in McSweeney’s, Salon, Guernica, and elsewhere. She lives in New Jersey with her daughter Nina.

Emily Raboteau is the author of the novel, The Professor’s Daughter, and the work of narrative nonfiction, Searching for Zion: The Quest for Home in the African Diaspora, winner of a 2014 American Book Award.  She lives in Upper Manhattan and is at work on a collection of essays entitled, Who is Responsible for the Suffering of Your Mother?