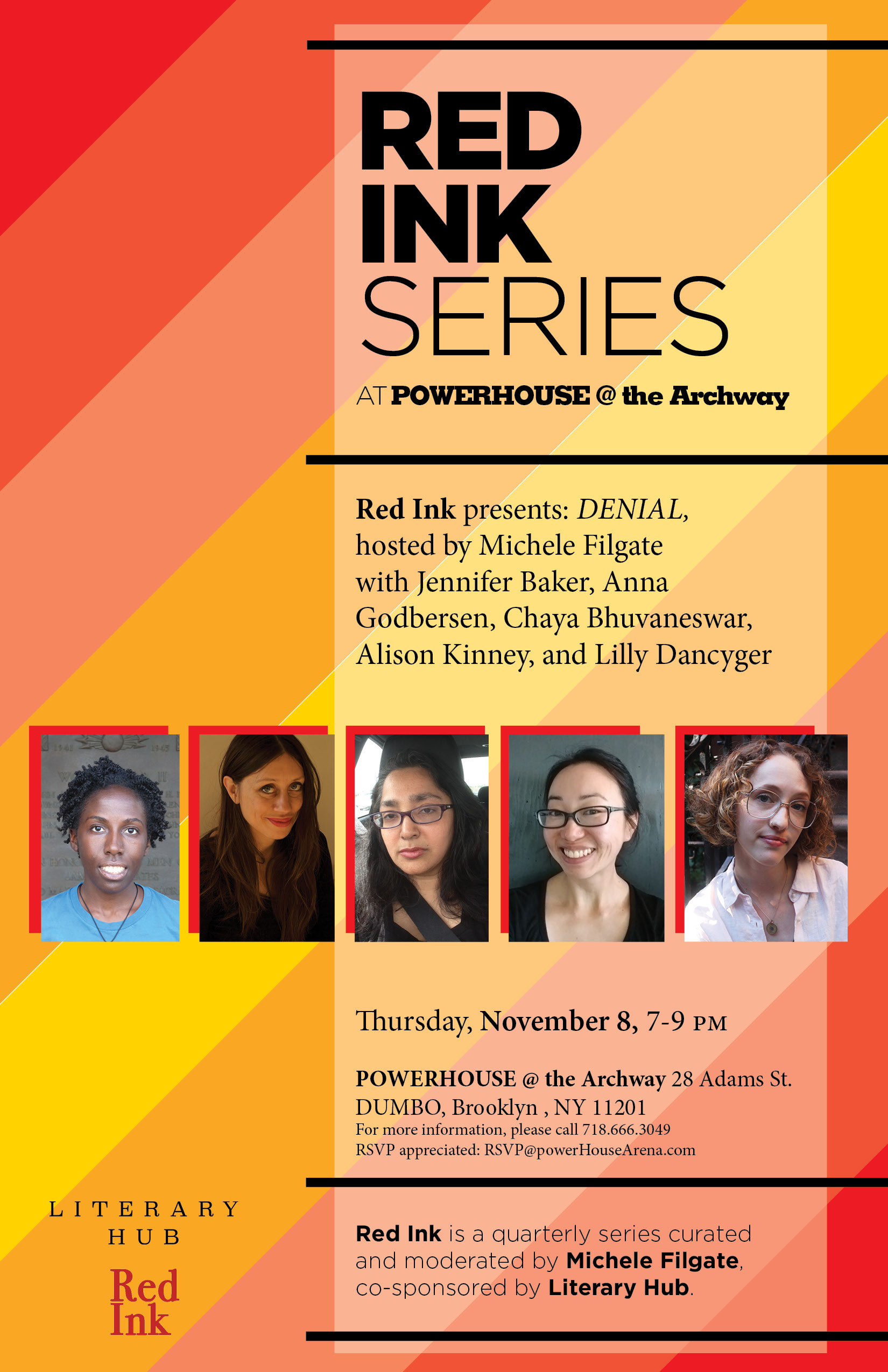 Red Ink is a quarterly series curated and hosted by Michele Filgate, and co-sponsored by Literary Hub. Red Ink makes one think of vitality, blood, the monthly cycle, correcting history, and making a mark on the world. This dynamic series focuses on women writers, past and present. The next discussion, “Denial,” will feature Jennifer Baker (Everyday People), Anna Godbersen (When We Caught Fire), Chaya Bhuvaneswar (White Dancing Elephants), Lilly Dancyger (Narratively), and Alison Kinney (Hood).

Alison Kinney is the author of the nonfiction book HOOD (Bloomsbury Publishing) and a correspondent for The Paris Review Daily. Her writing has appeared online or in print at The New Yorker, Harper’s, Lapham’s Quarterly, Longreads, The New York Times, and other publications. She teaches nonfiction writing at The New School and an online getting started bootcamp for Catapult.

Anna Godbersen is the author of The New York Times bestselling LUXE series for young adults, which she followed with the BRIGHT YOUNG THINGS series. THE BLONDE was her first book for grownups. She was born in Berkeley, California and moved to New York to attend Barnard College. After graduating she worked in the literary department of Esquire magazine, where she vetted short story submissions and wrote book reviews. Her most recent book is WHEN WE CAUGHT FIRE, a young adult novel set during the Great Chicago Fire of 1871, which HarperTeen published in October. She lives in Brooklyn.

Chaya Bhuvaneswar is a practicing physician and writer whose work has appeared or is forthcoming in Narrative Magazine, Tin House, Electric Li, The Millions, Joyland, Large Hearted Boy, Chattahoochee Review, Michigan Quarterly Review, The Awl, jellyfish review, aaduna and elsewhere, with poetry in Cutthroat, sidereal, Natural Bridge, apt magazine, Hobart, Ithaca Lit, Quiddity and elsewhere. Her poetry and prose juxtapose Hindu epics, other myths and histories, and the survival of sexual harassment and racialized sexual violence by diverse women of color. IN addition to the Dzanc Books Short Story Collection prize under which her debut collection WHITE DANCING ELEPHANTS will be released on Oct 9 2018, she recently received a MacDowell Colony Fellowship, Sewanee Writers Conference Scholarship and a Henfield award for her writing. Her work received several Pushcart Prize anthology nominations this year as well as a Joy Harjo Poetry Contest prize. Follow her on Twitter at @chayab77 including for upcoming readings and events.

Lilly Dancyger is the Deputy Editor of Narratively, where she oversees the memoir section, and a Contributing Editor at Catapult, where she also teaches essay writing. Her essays and journalism on sex, politics, and culture have appeared in Rolling Stone, The Rumpus, the Washington Post, Psychology Today, and more. She’s the editor of Burn It Down, an anthology of women and non-binary writers on personal and collective anger, forthcoming from Seal Press in 2019. Lilly is also at work on a memoir about her father’s art and heroin addiction, and the legacy of both in her life, and she hosts the monthly reading series Memoir Monday at Powerhouse Arena.

Jennifer Baker is a publishing professional, creator/host of the Minorities in Publishing podcast, and contributing editor to Electric Literature. In 2017, she was awarded a NYSCA/NYFA Fellowship & Queens Council on the Arts New Work Grant for Nonfiction Literature. Jennifer is editor of the short story anthology Everyday People: The Color of Life (Atria Books, 2018) Her writing has appeared in Forbes.com, LitHub, and Bustle among other online & print publications. Her website is jennifernbaker.com.