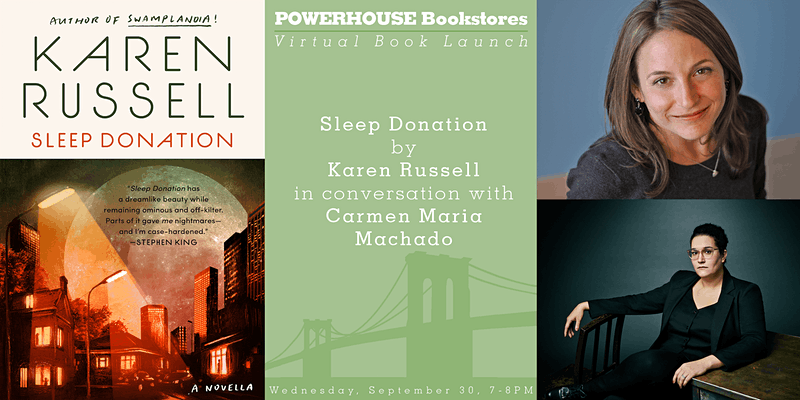 This event is virtual!

TICKETS: $22, includes a SIGNED copy of the book shipped anywhere in the U.S. for FREE!

THIS IS AN OFFICIAL 2020 BROOKLYN BOOK FESTIVAL EVENT! Celebrate the launch of Karen Russell’s SLEEP DONATION with Carmen Maria Machado and POWERHOUSE!

For the first time in paperback, a haunting novella from the uncannily imaginative author of the national bestsellers Swamplandia! and Orange World: the story of a deadly insomnia epidemic and the lengths one woman will go to to fight it.

Trish Edgewater is the Slumber Corps’ top recruiter. On the phone, at a specially organized Sleep Drive, even in a supermarket parking lot: Trish can get even the most reluctant healthy dreamer to donate sleep to an insomniac in crisis–one of hundreds of thousands of people who have totally lost the ability to sleep. Trish cries, she shakes, she shows potential donors a picture of her deceased sister, Dori: one of the first victims of the lethal insomnia plague that has swept the globe.

Run by the wealthy and enigmatic Storch brothers, the Slumber Corps is at the forefront of the fight against this deadly new disease. But when Trish is confronted by “Baby A,” the first universal sleep donor, and the mysterious “Donor Y,” whose horrific infectious nightmares are threatening to sweep through the precious sleep supply, her faith in the organization and in her own motives begins to falter.

Fully illustrated with dreamy evocations of Russell’s singular imagination and featuring a brand-new “Nightmare Appendix,” Sleep Donation will keep readers up long into the night and long after haunt their dreams.

KAREN RUSSELL won the 2012 and the 2018 National Magazine Award for fiction, and her first novel, Swamplandia!, was a finalist for the Pulitzer Prize. She is also the author of the novella, Sleep Donation, the story collections, Orange World and St. Lucy’s Home for Girls Raised by Wolves. She has received a MacArthur Fellowship and a Guggenheim Fellowship, the “5 under 35” prize from the National Book Foundation, the NYPL Young Lions Award, the Bard Fiction Prize, and is a former fellow of the Cullman Center and the American Academy in Berlin. She lives in Portland, Oregon with her husband and children.

CARMEN MARIA MACHADO is the author of the bestselling memoir In the Dream House and the short story collection Her Body and Other Parties. She has been a finalist for the National Book Award and the winner of the Bard Fiction Prize, the Lambda Literary Award for Lesbian Fiction, the Lambda Literary Award for LGBTQ Nonfiction, the Shirley Jackson Award, and the National Book Critics Circle’s John Leonard Prize. Her essays, fiction, and criticism have appeared in The New Yorker, The New York Times, Granta, Vogue, and elsewhere.