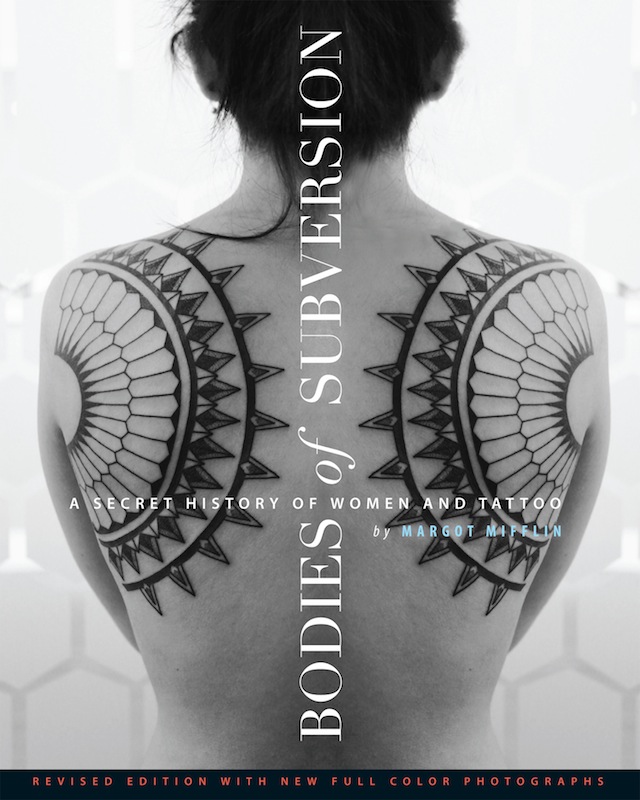 Margot Mifflin, author of powerHouse Books’ Bodies of Subversion, and Marisa Kakoulas will host a panel discussion with some of the top women in the tattoo industry including Roxx, Virginia Elwood, and Stephanie Tamez.

About Bodies of Subversion:

Bodies of Subversion was the first history of women’s tattoo art when it was released in 1997, providing a fascinating excursion to a subculture that dates back to the nineteenth-century and including many never-before-seen photos of tattooed women from the last century. Newly revised and expanded, it remains the only book to chronicle the history of both tattooed women and women tattooists. As the primary reference source on the subject, it contains information from the original edition, including documentation of:

The book contains 50 new photos and FULL COLOR images throughout including newly discovered work by Britain’s first female tattooist, Jessie Knight; Janis Joplin’s wrist tattoo; and tattooed pastor Nadia Bolz-Weber. In addition, the updated 3rd edition boasts a sleek design and new chapters documenting recent changes to the timeline of female tattooing, including a section on: celebrity tattoo artist Kat Von D, the most famous tattooist, male or female, in the world; the impact of reality shows on women’s tattoo culture; and, therapeutic uses of tattooing for women leaving gangs, prisons, or situations of domestic abuse.

As of 2012, tattooed women outnumber men for the first time in American history, making Bodies of Subversion more relevant than ever. Margot Mifflin writes about women, art, and contemporary culture. She has written for The New York Times, ARTnews, Entertainment Weekly, The Believer, and Salon.com, and she lectures about body modification at colleges, museums, and universities nationally. Mifflin is an associate professor in the English Department of Lehman College of the City University of New York (CUNY), and directs the Arts and Culture program at CUNY’s Graduate School of Journalism, where she also teaches. Her book, The Blue Tattoo: The Life of Olive Oatman was published by The University of Nebraska in 2009.