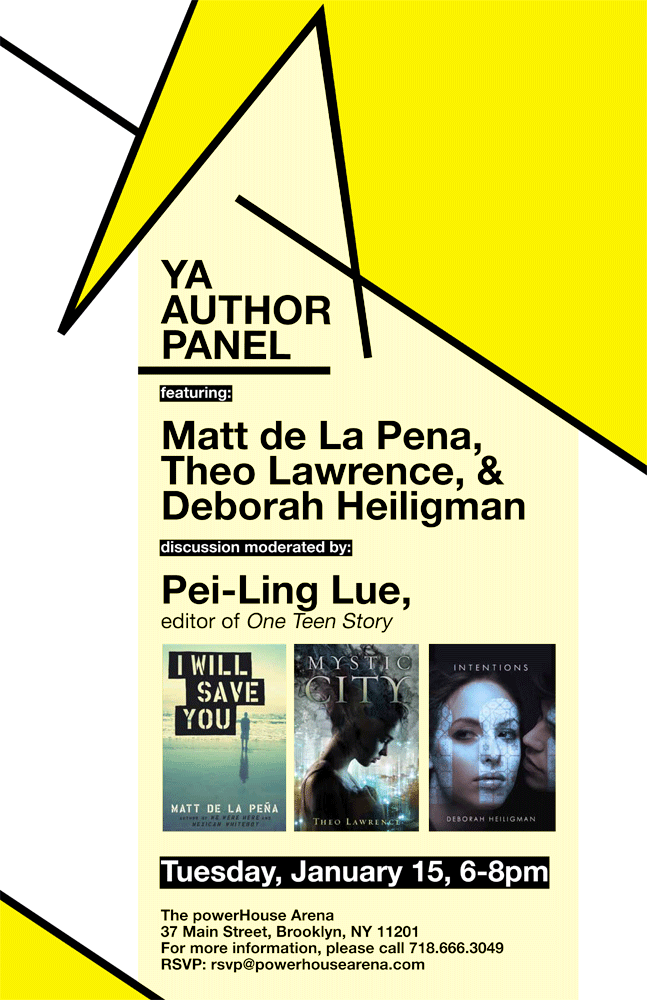 Meet some of the hottest YA authors at this evening of readings and conversation. Featuring Matt de la Pena (I Will Save You), Deborah Heiligman (Intentions), and Theo Lawrence (Mystic City). One Teen Story editor Pei-Ling Lue will moderate the discussion. Deborah Heiligman is the author of close to 30 books for children and teens. CHARLES AND EMMA: The Darwins’ Leap of Faith was a National Book Award Finalist, A Printz Honor, the YALSA Excellence in Nonfiction winner, and a finalist for the LA Times Book Prize. Her forthcoming book, INTENTIONS, a YA novel, is an exploration of betrayal, love, faith, and the time in a kid’s life when the black and white of childhood becomes the gray of adulthood. It’s got religion, sex, drugs, and rock ‘n roll. Also, it’s funny. Theo Lawrence is a graduate of Columbia University and the Juilliard School. A Presidential Scholar in the Arts for Voice, he has performed at Carnegie Hall, the Kennedy Center, and Off-Broadway. Matt de la Pena’s debut novel, Ball Don’t Lie, was an ALA-YALSA Best Book for Young Adults and an ALA-YALSA Quick Pick and is soon to be released as a motion picture starring Ludacris, Nick Cannon, Emelie de Ravin, Grayson Boucher, and Rosanna Arquette (based on the screenplay he co-wrote with director Brin Hill). de la Pena’s second novel, Mexican WhiteBoy, was an ALA-YALSA Best Book for Young Adult (Top Ten Pick), a 2009 Notable Book for a Global Society, a Junior Library Guild Selection and made the 2008 Bulletin for the Center of Children’s Literature Blue Ribbon List. His third novel, We Were Here, will be published by Delacorte in October, 2009. His short fiction has appeared in various literary journals, including: Pacific Review, The Vincent Brothers Review, Chiricu, Two Girl’s Review, George Mason Review, and Allegheny Literary Review. de la Pena received his MFA in creative writing from San Diego State University and his BA from the University of the Pacific, where he attended school on a full athletic scholarship for basketball. He currently lives in Brooklyn, NY, where he teaches creative writing.